XVIII.6 The extended phenotype concept suggests that coevolution can involve fixation of genes that do not affect the phenotype of the organism in which they are located but rather the phenotype of members of another species

Most genes apparently affect the probability of their evolutionary fixation in that, through controlling the progress of ontogenesis, they determine the properties and behavior (phenotype) of the individuals in whose genome they are located.As control of ontogenesis is directly or indirectly affected by tens of thousands of genes contained in the genome of the particular organism, the individual genes must learn during evolution to closely cooperate in very varied ways.A great many genes participate in the creation of the final phenotype of an organism in that they affect the expression of other genes, both directly at the level of regulation of gene expression in the nucleus and also indirectly in that, at a certain phase in ontogenesis or the life cycle they affect the probability with which the organisms or certain of their cells encounter inducers orrepressors of expression of other genes.If close coevolution of two species of organisms occurs in nature, the individual genes can evolutionarily “learn” to indirectly affect, not only the function of other genes in their own genome, but also the function of genes located in the genome of their coevolutionary partners/competitors.In some cases, these interventions into the creation of the phenotype of a member of a foreign species are facilitated in that both species are, at least temporarily, in close physical contact.In this case, the gene can control the production of a certain product, which can either freely diffuse as the usual morphogen controlling normal morphogenesis into the tissue of the other species, or it can be actively transferred to the relevant tissue (or relevant plant tissue).For example, gall-flies or some kinds of greenfly are capable of using this means to induce the formation of galls on plants, i.e. frequently very complicated bodies formed from the plant tissue, acting as a shelter and often also as a source of food for them. 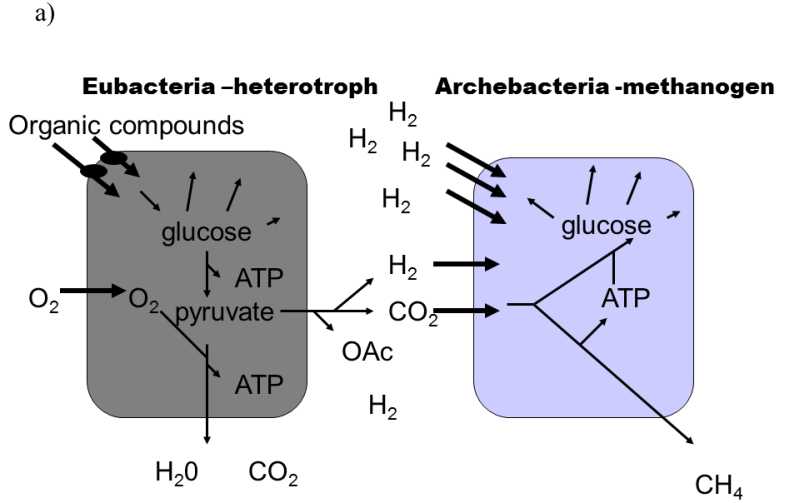 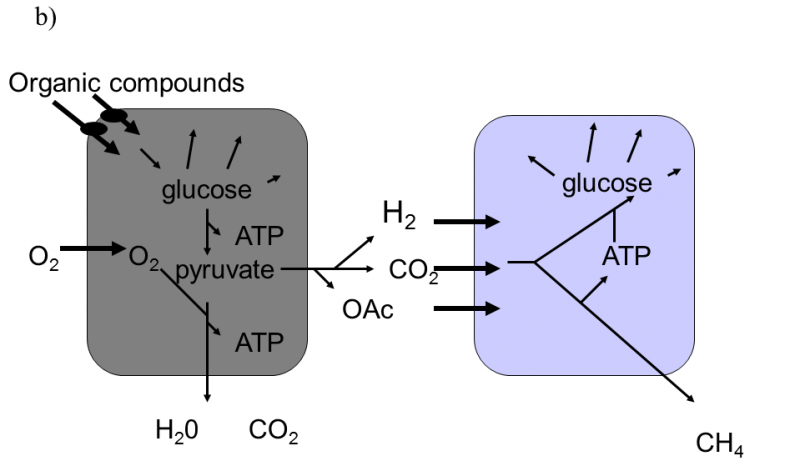 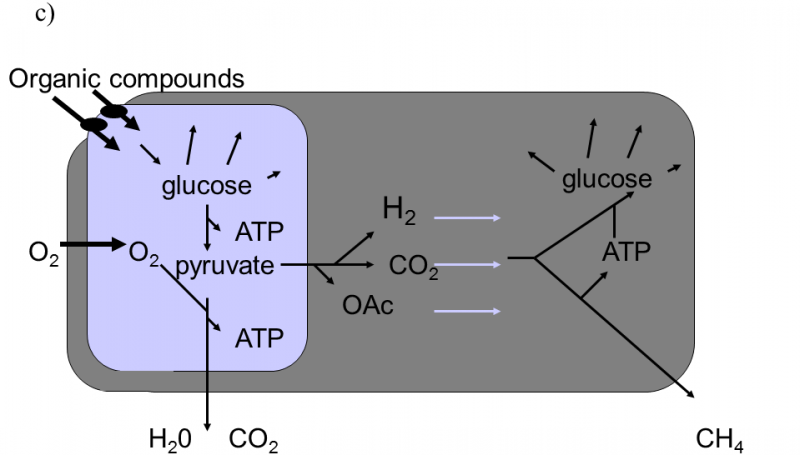 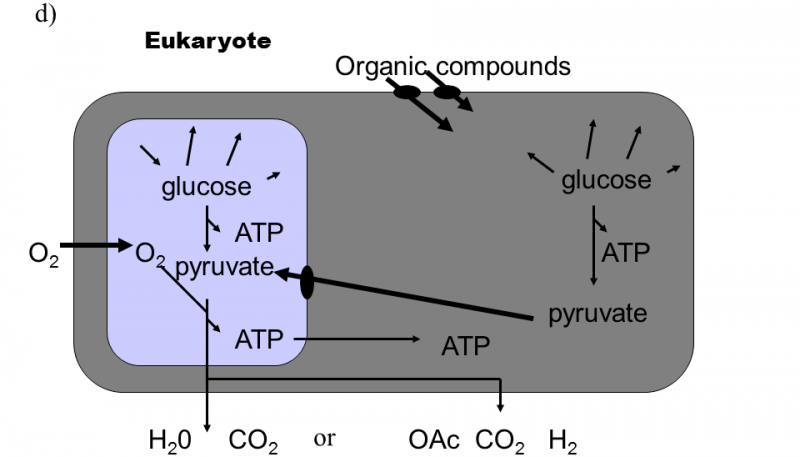 Fig. XVIII.3 Martin–Müller hydrogen hypothesis of the symbiotic formation of eukaryotic cells. According to this hypothesis, eukaryotic organisms developed in several stages from heterotrophic bacteria, emitting hydrogen into the environment as one of their waste products, and autotrophic archaebacteria, utilizing hydrogen from the environment to synthesize organic substances and emitting methane into the environment (a). In the first stage, a cell consortium was formed, in which eubacteria produced hydrogen and this was immediately used for their needs by archaebacteria. This freed archaebacteria from dependence on relatively rare sources of natural hydrogen (b). In the subsequent stage, partial endocytosis of the bacteria into the archaebacteria cells occurred. This state improved the utilization of hydrogen, as it was no longer capable of escaping into the environment. The archaebacteria began to utilize the other waste products of eubacterial metabolism to a greater degree.  However, the surface of the eubacterial cells continued to locally communicate with the external environment, from which they transported organic substances for their heterotrophic metabolism (c). The last stage in the evolution of the eukaryotic cells consisted in transferring molecular transporters for organic substances from the surface of the eubacteria to the surface of the archaebacteria and turning the direction of part of the metabolic pathway of the archaebacteria from anabolism to catabolism. As a result of these changes, it was possible to complete the internalization of the eubacterial cell which, since that time, began to obtain organic substances for its metabolism only indirectly from the archaebacterial cells. The archaebacterial cells ceased to provide the no-longer required hydrogen and, instead, began to provide ATP directly. This symbiosis permitted integration and improvement of the life processes of both symbionts through shifting the individual metabolic functions between the compartments of the original symbionts. As a consequence, both the mitochondria of most eukaryotic organisms, producing water and CO2 as waste products, and also the hydrogenosomes of some protozoa and fungi, producing organic acids and hydrogen as waste products (d), were formed from eubacteria. According to Martin and Müller (1998).

In other cases, one of the partners directly modifies the genome of the other partner by incorporating some of its genes into it, which then modify the phenotype of one organism to the needs of the second organism.A well-known example consists in the bacteria Agrobacterium tumefaciens, which incorporate their Ti-plasmid into the cells of their plant host; amongst other things, this Ti-plasmid also carries the genes for synthesis of opines, substances that Agrobacterium, as one of the few organisms on Earth, can use as a source of energy (Kado 1998).

However, in a number of cases, one organism affects another organism without actually transferring any substance to it.Rather, it simply passes on information that affects the behavior or properties of the other organism.Of course, this information can be transferred only through a signal and each signal has some material carrier.On the other hand, there is a clear difference between whether one organism affects another through the transfer of genes into its cells or through an optical signal that, after evaluation by the nervous system of the recipient, initiates a certain pattern of behavior in the second organism.The close evolution of pairs of species can thus lead to a situation where the phenotype of one organism, and thus some of its traits, i.e. properties or patterns of behavior, are controlled by genes that are located in the genome of the organism of a different species.In these cases, the particular traits are frequently disadvantageous for their carrier and simultaneously advantageous for the organism in whose genome they are coded.Consequently, not only those alleles that usefully affect, from their viewpoint (i.e. from the viewpoint of the effectiveness of their own reproduction), the phenotype of the individuals in whose genome they are located, but also those alleles that thus affect the phenotype of other individuals, including the phenotype of the members of another species, can become fixed in evolution.In these cases, we say that certain genes control (affect) the creation of an extended phenotype, i.e. a phenotype that is not limited by the physical boundaries of the individual in whose genome the particular genes are located (Dawkins 1982).

The members of nonreproducing casts in eusocial species become an object of manipulation especially easily. The nests of ants and bees contain an enormous number of species of organisms whose members parasitize on their hosts and allow themselves to be fed by them, be moved from one place to another and have their progeny cared for by them.These social parasites induce the relevant behavior, advantageous for the parasite, in the host workers through specific chemical, tactile or optical signals.The easy manipulation of the members of sterile casts in eusocial species is caused by the fact that individual selection cannot be active amongst them.The workers of ants that do not submit to manipulation have no evolutionary advantage compared to workers that submit to manipulation.Selection in the direction of resistance to manipulation can occur only at the level of the individual colonies and thus with far lower effectiveness than in the parasitic species.It is apparent that, in eusocial species, their manipulability can also be assisted to a substantial degree by the fact that the individuals already exhibit a number of patterns of behavior connected with care for the members of their own nest and that it is sufficient for the parasitizing species to simply evolutionarily learn to induce these patterns in situations advantageous for it through the relevant initiation signal.

Was this information useful for you?
The classical Darwinian theory of evolution can explain the evolution of adaptive traits only in asexual organisms. The frozen plasticity theory is much more general: It can also explain the origin and evolution of adaptive traits in both asexual and sexual organisms Read more
‹ XVIII.5.2 The closest form of coexistence of two species of organisms is endocytobiosis, responsible for the mechanism of the origin of some organelles of the contemporary eukaryotic cell up XVIII.6.1 Production and release of substances that attract the parasites’ natural enemies is an important mechanism of the host’s defense against them ›
Draft translation from: Evoluční biologie, 2. vydání (Evolutionary biology, 2nd edition), J. Flegr, Academia Prague 2009. The translation was not done by biologist, therefore any suggestion concerning proper scientific terminology and language usage are highly welcomed. You can send your comments to flegr