XVIII.6.1 Production and release of substances that attract the parasites’ natural enemies is an important mechanism of the host’s defense against them

Probably a very extensively used means of defense of a host organism, especially among plants, against parasites consists in the formation of substances that are released into the environment on attack by a parasite and that attract the natural enemies of the parasite, predators and hyperparasites.This type of kairomone, i.e. a substance used for exchange of signals between the members of different species, usually but not always useful mainly for the receiver, is released only under highly specific conditions.If the leaves of a plant are damaged by the caterpillars of the butterflies of a certain species, kairomones are released; to the contrary, if they are damaged to a similar extent by the caterpillars of a different species or mechanically, for example by the experimenter, the kairomone is not released (de Moraes et al. 1998)(Fig. XVIII.4).In fact, in some 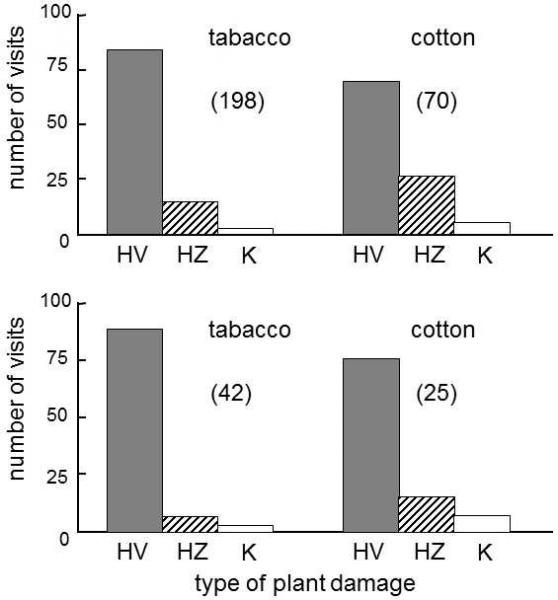 Fig. XVIII.4 Communication between parasitoids and a plant damaged by caterpillars. In two independent experiments, which were repeated twice in each case, tobacco or cotton plants were exposed to feeding by the caterpillars of  tobacco budworm Heliothis virescens (grey columns) and corn earworm Helicoverpa zea (hatched columns) moths. After 48 hours, 2 plants damaged by H. virescens, 2 plants damaged by H. zea and 2 control undamaged plants (white columns) were transferred to a cotton field and the number of females of the red-tailed wasp Cardiochiles nigriceps, i.e. a parasitoid attacking only the caterpillars of Heliothis virescens, landing on the individual types of plants within one hour was monitored. Graph (a) shows the result of the experiment in which the caterpillars remained on the leaves after the feeding time, while graph (b) shows the result of the experiment in which the leaves were removed together with the caterpillars prior to transfer to the field. The numbers in brackets give the total number of visits by parasitoids. According to de Moraes et al. (1998).

cases, the plant is capable of controlling the composition of the released kairomones in dependence on the species of natural enemies that are active at the particular time of day (de Moraes, Mescher, & Tumlinson 2001).Thus, a different mixture of kairomones is released in the daytime than at night.

There are a number of indirect proofs that a great many animals also employ a similar strategy for defense.It is, at the very least, remarkable how many parasitoids are actually hyperparasites, i.e. species specializing in parasitizing other parasites or parasitoids.The reason for preferential attack on parasites could be the fact that the hyperparasite has a natural ally in seeking out its host – the host attacked by the parasite.From the viewpoint of this host, it is advantageous for several reasons if it attracts the attention of a hyperparasite by chemical or other signals.In some cases, a hyperparasite can completely exterminate a parasite and thus directly improve the fitness of the host;in other cases, the individual attacked by the parasite dies anyway; however, because the hyperparasite also exterminates the parasite, this can lead to an increase in the inclusive fitness of the host because a dead parasite cannot attack biologically related hosts in the vicinity.

The third means is that a host can utilize the mafia effect, i.e. a strategy that is otherwise used by a number of parasitic species.This strategy consists in that the parasite does not damage its host much until the host begins to effectively to defend itself.As soon as the host initiates a defense mechanism, the parasite somehow “penalizes” it (Gadagkar & Kolatkar 1996).This phenomenon is most marked in cases where the interaction of a host with a parasite takes place at an ethological level.The cuckoos of some species remain in the vicinity of nests in which they lay their eggs and watch how the host bird acts toward their eggs.If the host throws the foreign egg out of the nest, then the cuckoo breaks all the eggs in the nest during the next inspection.It is thus better for the host to leave the egg alone because, for this species of cuckoo, the young bird does not destroy the whole brood and thus parents that tolerate the cuckoo have a chance of bringing up at least some of their progeny.Consequently, selection prefers birds that are not able to recognize a foreign egg in their nest or at least tolerate it (Zahavi 1979; Soler et al. 1995).A quite analogous strategy is apparently employed by a number of pathogenic organisms, including bacteria (Soler, Moller, & Soler 1998).A great many bacteria begin to release toxins only when they are attacked by the immune system of the host organism or when the host organism prevents them from having access to some essential resource, very frequently iron.

The attacked host can also use the mafia effect in the above-described host – parasite – hyperparasite interaction.If the parasite does not damage it much, it is better to tolerate it.In plants, the presence of a benign parasite (microherbivore) can even protect the plant against other, more dangerous species (Saikkonen et al. 1998).If the parasite were to greatly damage it, it would attract hyperparsites and predators that destroy the parasite.In this case, once again, the species or lines of parasites that greatly damage their host are eliminated.Mathematical models indicate that a mechanism based on the mafia effect can be relatively easily fixed in a population and that, for example, when destruction of the egg batch does not require any great effort on the part of a cuckoo, this will even be an evolutionarily stable strategy (Soler, Moller, & Soler 1998).

Was this information useful for you?
The classical Darwinian theory of evolution can explain the evolution of adaptive traits only in asexual organisms. The frozen plasticity theory is much more general: It can also explain the origin and evolution of adaptive traits in both asexual and sexual organisms Read more
‹ XVIII.6 The extended phenotype concept suggests that coevolution can involve fixation of genes that do not affect the phenotype of the organism in which they are located but rather the phenotype of members of another species up XVIII.7 Mimetism, imitation of the appearance of the members of another species, is an interesting product of coevolution ›
Draft translation from: Evoluční biologie, 2. vydání (Evolutionary biology, 2nd edition), J. Flegr, Academia Prague 2009. The translation was not done by biologist, therefore any suggestion concerning proper scientific terminology and language usage are highly welcomed. You can send your comments to flegr