XVIII.8 Warning coloration is a product of predator and potential prey coevolution

Another interesting product of coevolution is the formation of warning (aposematic) coloration in species whose members are dangerous or inedible.Such species frequently exhibit a very striking phenotype, including not only obvious coloration, most frequently alternating stripes of contrasting colors (black with yellow or orange) but also a number of other traits and patterns of behavior that, together, make the members of this species more visible.The advantage of warning coloration for dangerous species is obvious as it reduces the danger of confusion with other, innocuous species and thus reduces the risk of attacks by predators.However, the evolution of the formation of an aposematic phenotype constitutes a certain problem.Until predators learn to avoid a aposematic prey, the more visible individuals more readily become the prey of predators than cryptic individuals. The evolution of an aposematic phenotype can be assisted if aposematic individuals occur in nature in clusters, i.e. always a greater number of individuals together, than if these are species occurring as lone individuals (Fig. XVIII.7).In this case, the predator will find the aposematic prey easily, but will attack only some individuals in the group; when it discovers that they are inedible or dangerous, it will leave the other members of the cluster alone (Alatalo & Mappes 1996).

In addition, it is advantageous for aposematic individuals if they are mutually similar, i.e. if only one or several typical phenotypes occur in nature (for example, the above-mentioned black and yellow stripes), which will designate the members of the particular species as belonging in the category of dangerous or inedible creatures.In this case, the other species more readily learn that the creatures with this phenotype are not suitable prey and that they should not be attacked.Here, it is not important whether the individual predators learn to recognize the aposematic phenotype during their lifetimes (Marples, Vanveelen, & Brakefield 1994)(which, in the case of recognition of lethal snakes it technically rather difficult in the absence of social learning – even the stupidest predator can fail to confuse such a snake with prey only once) or whether  this is a case of evolutionary learning, in which the gene pool of the predator over time fixes randomly formed mutations determining congentital ability of the members of the particular species not to attack species with aposematic phenotype (Coppinger 1969).

At the present time, it is not very clear to what degree Müllerian mimicry and thus actually historical randomness, and to what degree other factors participate in the uniformity of an aposematic phenotype, especially in the uniformity of warning coloration.It is possible that the particular warning coloration was formed as one of a great many possibilities sometime in the past and, since then, it has been advantageous to use it for mutually unrelated species, as a great many species of predators are already capable of recognizing it and avoiding its carriers.However, it also may be that sensory drive on the part of predators also played a role in its formation.We should not overlook this alternative; it is quite possible that the combination of yellow (orange) and black stripes is objectively the most easily distinguishable optical signal for purely physical or neurological reasons.

It is obvious that the aposematic phenotype became an object of frequent imitation by innocuous species.Compared to other forms of Batesian mimicry, however, imitation of aposematic species brings the innocuous species a substantial disadvantage, especially at the beginning, when the similarity is not perfect – the individuals are very visible and a predator can still differentiate them from the imitated species (Fig. XVIII.8).Consequently the evolutionary emergence of this form of 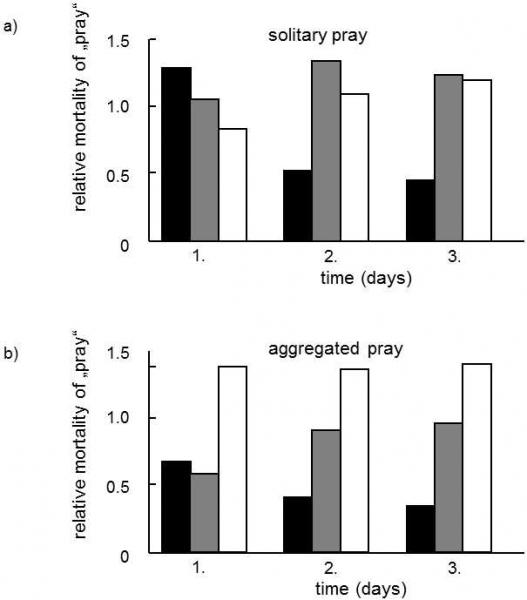 Fig. XVIII.7 The effect of aggregation of the prey on the advantageousness of aposematic coloration. In experiments repeated three days in a row, great tits were offered three types of artificial prey – aposematic inedible (black columns), cryptic inedible (grey columns) and cryptic edible (empty columns). These were always rice straws filled with animal fat, fitted at the ends with paper wings with drawn patterns (crosses or squares). The symbols on the wings were also drawn on the floors of the experimental aviary (cryptic prey) or these symbols differed from the symbols drawn on the floor (aposematic prey). The inedible kinds of prey were impregnated with a chloroquine solution. The type of prey that suffered from the greatest predation was monitored in the individual experiments when the individual types of prey were distributed evenly in the aviary - solitary prey (a), or when 4 items of the same type were placed together – aggregated prey (b). It is apparent that, in the second case, the aposematic prey was much better protected, even on the first day of the experiment. According to Alatala and Mappese (1996).

mimicry (imitation of an aposematic phenotype) is less probable than the formation of some other type of Batesian mimicry (imitation of a dangerous or inedible species without the typical warning colouration).Even in cases where the imitation of an aposematic species originally emerged as normal Batesian mimicry, the members of the innocuous species  are regularly exposed to substantial selection pressure for formation of defense mechanisms against predators, for example, for synthesis or accumulation of a chemical that will make them inedible or unappetizing  Thus, Batesian mimicry can secondarily change into Müllerian mimicry.In practice, both types of mimicry anyway form the ends of a more or less continuous series.

The last two evolutionary mechanisms that should be mentioned in a discussion of the formation of an aposematic phenotype in dangerous animals are sorting by stability  andspecies selection.In the case of correlation between an aposematic phenotype and dangerousness or inedibility of the members of individual species, there is an unequal probability of extinction of the species with this correlation and without it.Stated simply, brightly coloured species, whose members are not dangerous or at least are not unappetizing or inedible, are at far greater risk of extinction than brightly coloured species with some of the above protective characteristics.Thus, according to this hypothesis, bright coloration is formed randomly in various species; however, in nature, only those of them that are simultaneously unappetizing, inedible or dangerous can survive. 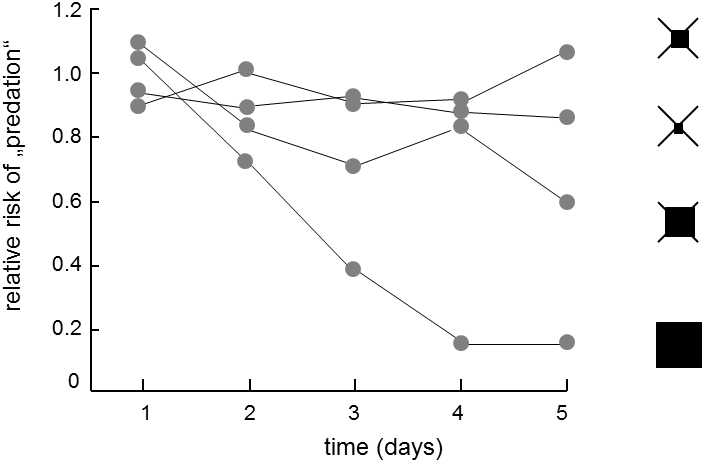 Fig. XVIII.8 The effect of the conspicuousness of an aposematic signal on the rate of predator learning. In the experiment, artificial cryptic and aposematic “prey” were offered to great tit predators; the prey consisted in squares of paper containing a piece of almond with a drawn cross (cryptic prey) or one of the symbols depicted on the right-hand part of the graph (aposematic prey). The pieces of almond representing the aposematic prey were impregnated with a 40% chloroquine solution. In each experiment, repeated 5 days in a row, the tit was offered the same number of cryptic prey and one type of aposematic prey and the degree to which the tits preferred the cryptic prey was monitored. It is apparent from the shape of the graph that, on the first day of the experiment, the tits preferred the more conspicuous aposematic prey; as time progressed, this type of prey was increasingly well protected. The rate of learning became faster as the aposematic signal became stronger. The strength of the signal is indicated by the black square. According to Lindström et al. (1999).

Was this information useful for you?
The classical Darwinian theory of evolution can explain the evolution of adaptive traits only in asexual organisms. The frozen plasticity theory is much more general: It can also explain the origin and evolution of adaptive traits in both asexual and sexual organisms Read more
‹ XVIII.7 Mimetism, imitation of the appearance of the members of another species, is an interesting product of coevolution up XVIII.8.1 Some cases of warning coloring can fall under the extended phenotype category, i.e. they can be the product of genes located in the genome of species of organisms other than those that bear the warning colours ›
Draft translation from: Evoluční biologie, 2. vydání (Evolutionary biology, 2nd edition), J. Flegr, Academia Prague 2009. The translation was not done by biologist, therefore any suggestion concerning proper scientific terminology and language usage are highly welcomed. You can send your comments to flegr