XVIII.7 Mimetism, imitation of the appearance of the members of another species, is an interesting product of coevolution

Mimetism(mimesis) is a very frequent and striking product of the coevolution of two or more species; this phenomenon consists in imitating the appearance (including imitation of the behavior) of the members of another, frequently completely unrelated species.The mimetized species are frequently especially dangerous or at least inedible (Alonsomejia & Brower 1994).To the contrary, the mimetizing species may be either some other dangerous or inedible species, where this phenomenon is termed Müllerian mimicry (according to F. Müller), or an innocuous and edible species, where this is termed Batesian mimicry (according to H. W. Bates).In the former case (Müllerian mimicry), the mutual imitation of the two various species is advantageous for both species, as predators are more readily capable of learning to avoid the relevant species.Thus, coevolution of the species progresses in the same direction, i.e. towards the greatest mutual similarity of the members of the two species (Brower 1996).The South American species of butterflies Heliconius erato and Heliconius melpomene are typical examples (Brower 1996).Because of their complicated evolutionary history, both species form allopatrically distributed strains, where strains of both species living in the same territory are generally very similar (Fig. XVIII.5).It has been verified experimentally that, after transfer of individuals imitating a certain pattern to an area in which a differently coloured strain of the imitated butterfly occurs, the butterflies with the wrong coloring rapidly succumb to predators (Fig. XVIII.6). In cases of Müllerian mimicry, it is not easy to determine which of the species was originally the imitating and which was imitated.The result of comparison of phenotypes of phylogenetic relatives of mimetizing species can be a guide, as can observation of the phenotypes of the relevant species inside and outside the areas of their common occurrence. 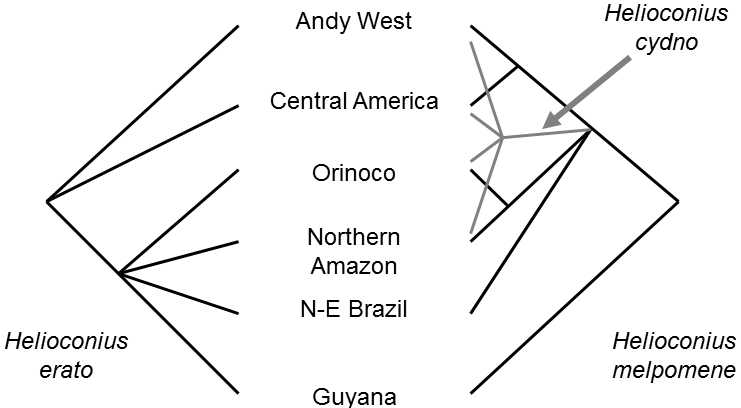 Fig. XVIII.5 Convergence of warning patterns in American butterflies of the Heliconius genus. The geographic races of several species of American Heliconius butterflies form a textbook example of Müllerian mimicry. The butterflies of various species occurring in a certain territory have common warning (aposematic) patterns, different from the warning patterns of butterflies in a different territory. Molecular studies (sequencing of mitochondrial DNA) have, however, shown that the evolution of the patterns in the individual species was not parallel, but rather convergent (the obtained cladograms were not mutually congruent) and thus that the phenotype similarity does not agree with the phylogenetic relatedness of the individual races. The study also demonstrated that the species H. melpomene is apparently paraphyletic to the species H. cydno. According to Brower (1996).

In the second case (Batesian mimicry), the mutual similarity is advantageous only for the innocuous (edible) species.This is frequently disadvantageous for the imitated  species, as predators are less likely to consider these species inedible in the presence of mimetics.It is obvious that confusion of an innocuous species with a dangerous species is detrimental especially for predators; however, the attacked individual of the dangerous species is also frequently harmed in such an attack.When an inedible species is imitated by an edible species, this aspect is even more marked; it is of little advantage to the inedible species that the predator finally spits it out because of the unpleasant taste instead of swallowing it.From an evolutionary standpoint, it is important that Batesian mimicry can stably bring the imitating species an advantage, especially when its population is substantially smaller than that of the imitated species.In some species of butterfly, it thus occurs that the individual forms of a single species of butterfly, occurring together, have different phenotypes and imitate various species of inedible butterflies (Joron & Mallet 1998).In other species, e.g. Papilio dardanus, only the females imitate an inedible species and the males retain the original appearance of the relevant species (Komarek 1997).It is assumed that the failure of the males to adapt their phenotype is either a result of sexual selection (males with a different phenotype would not be recognized by the females of their own species) or because, compared to females, lesser selection pressure is exerted by predators on males compared to females (these would tend to attack the larger females) (Ohsaki 1995).However, it has also been suggested that, in these cases, mimetism constrained only to the females is related to heterogametic sex determination in male butterflies (Hastings 1994).According to these ideas, the genes that determine the preferences of the females in selecting a sexual partner are located on the female W-chromosome.If these genes ensure that the females will prefer males without the mimetic coloration, they will be spread by the mechanism described under the handicap hypothesis (and simultaneously sexual selection will occur in favor of the nonmimetic males). From the standpoint of functioning of the mechanism of handicaps, it is a key factor that the genes for preference for handicapped (nonmimetic) males located on the W-chromosome can never occur in the bodies of males (in contrast to genes on autosomes or on the Z-chromosome) and will always profit only from the advantages that the nonmimetic male phenotype provides without simultaneously participating in the disadvantages following from the given handicap (nonmimetic coloration).This hypothesis could, amongst other things, explain why butterflies and birds, i.e. taxons with heterogametic females, most frequently have brightly coloured males and more or less cryptically colored females. 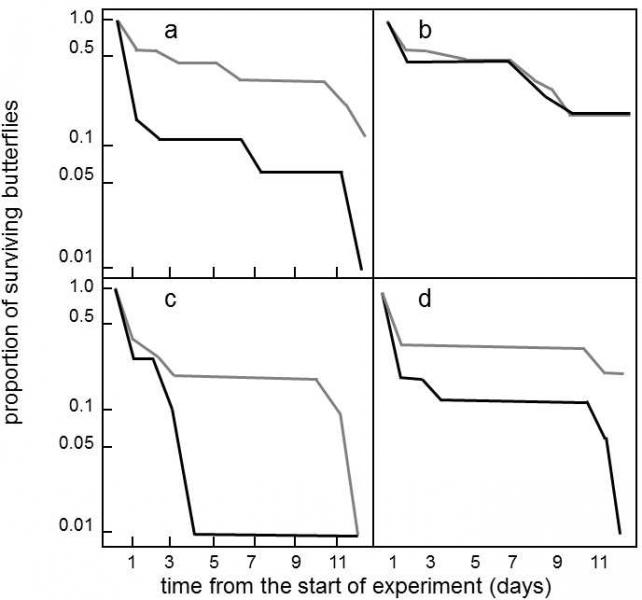 In some cases, it is not possible to draw a sharp line between Müllerian and Batesian mimicry.  For example, the brightly coloured butterflies of the Danaus plexippus species are poisonous when young, as they contain glycosides derived from plants of the Asclepias genus, eaten by their caterpillars.However, as they get older, the glycoside content in the bodies of the butterflies gradually decreases so that, at the end of the season, the older butterflies exhibit Batesian mimicry of the poisonous younger members of their own species (Alonsomejia & Brower 1994).

Was this information useful for you?
The classical Darwinian theory of evolution can explain the evolution of adaptive traits only in asexual organisms. The frozen plasticity theory is much more general: It can also explain the origin and evolution of adaptive traits in both asexual and sexual organisms Read more
‹ XVIII.6.1 Production and release of substances that attract the parasites’ natural enemies is an important mechanism of the host’s defense against them up XVIII.8 Warning coloration is a product of predator and potential prey coevolution ›
Draft translation from: Evoluční biologie, 2. vydání (Evolutionary biology, 2nd edition), J. Flegr, Academia Prague 2009. The translation was not done by biologist, therefore any suggestion concerning proper scientific terminology and language usage are highly welcomed. You can send your comments to flegr