The process in which speciation occurs in that one species as a whole gradually changes anagenetically into a different species, i.e. the phenotype traits of its individuals change, is termed phyletic speciation. Phyletic speciation leads to an increase in the total number of species in the paleontological record, but the biodiversity existing in nature at the particular moment does not change, as one species simply changes into a different species. In contrast, in branching speciation, one parent species divides into two or more daughter species, which further evolve separately in their phenotype traits. If a new species is formed by phyletic speciation in a single evolutionary line, the individual species following one after another are designated as chronospecies and the disappearance of the older species, i.e. their conversion into new species, is termed pseudoextinction.

In some cases, cladistic speciation (Gould 2002)is differentiated as an independent type of branching speciation; in this type, the phenotype traits of the parent species do not change; a daughter species is split off from it and differs in both its phenotype and genotype (Fig. XXI.1). The 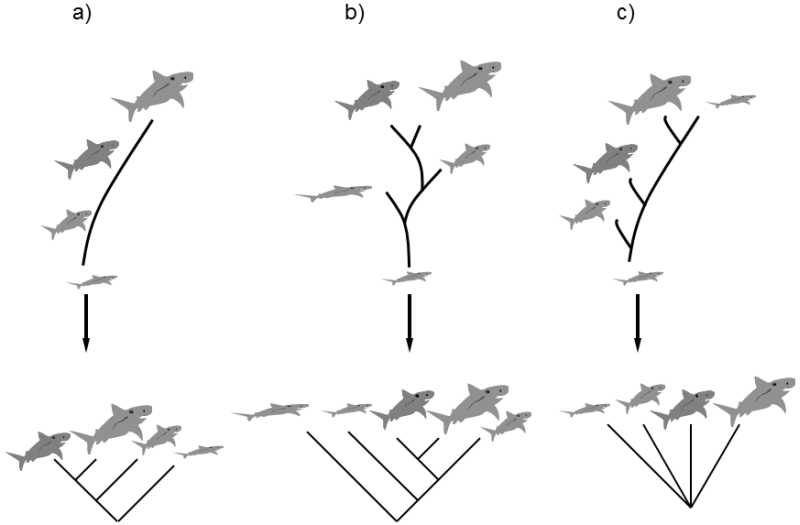 Fig. XXI.1 Phyletic, branching and clastistic speciation. Hypothetical scheme of phylogenesis including solely phyletic (1), branching (b) and cladistic (c) speciation. The lower half of the figure depicts the corresponding cladograms, i.e. schemes of the distribution of synapomorphy within the given phylogenetic line (see XXIII.7).

name cladistic speciation is not entirely a happy one. If a parent species gradually splits off a number of daughter species, then the dendograms formed using cladistic methods will show all the species branching off from a single point, i.e. this will correspond to polytomy at the given point. Simultaneously, it is the goal of cladists to create a dichotomically branched dendogram, i.e. a dendogram on which only two branches will branch out from each point.

The differentiation of speciation into phyletic speciation and branching speciation is justified at the theoretical level, but can be rather problematic in practice. Phyletic speciation in species consisting of a great many individual populations, i.e. apparently the majority of species, can frequently occur in only one or a few populations. Thus, at a given moment, populations with the individual species and populations with the new species coexist in nature. If the two types of populations coexist for a sufficiently long time, the process will be considered to correspond to branching speciation. If, on the other hand, the population with the original species soon becomes extinct, for example its members succumb to competition from the members of the new species, then this will seem to be phyletic speciation. Thus, in practice, we are capable of differentiating between the two kinds of speciation only for species with unstructured populations, i.e. in species that perhaps don’t even actually exist.

Was this information useful for you?
The classical Darwinian theory of evolution can explain the evolution of adaptive traits only in asexual organisms. The frozen plasticity theory is much more general: It can also explain the origin and evolution of adaptive traits in both asexual and sexual organisms Read more
‹ XXI SPECIATION up XXI.2 In terms of duration, there are instant speciations and gradual speciations ›
Draft translation from: Evoluční biologie, 2. vydání (Evolutionary biology, 2nd edition), J. Flegr, Academia Prague 2009. The translation was not done by biologist, therefore any suggestion concerning proper scientific terminology and language usage are highly welcomed. You can send your comments to flegr