XXI.2 In terms of duration, there are instant speciations and gradual speciations

Most speciations take quite a long time and these are called gradual speciations. Allopatric speciation is usually an example of this kind of speciation (see XXI.3). Genetic differences gradually accumulate between two populations of a single species occurring in two spatially separated territories, leading in time to phenotype differentiation of the members of the two populations and simultaneously to the formation of reproductive isolation barriers in sexually reproducing species. If the genetic differences accumulate only through the effect of genetic drift, the formation of sufficiently effective reproductive isolation barriers can take quite a long time. For example, in drosophila, the time required for accumulation of a sufficient number of genetic changes was estimated using the molecular clock at 1.5 – 3.5 million years (Coyne & Orr 1989). However, a great many examples of flora and fauna are known in which speciation does not occur even in situations where their American and Asian areas of occurrence were geographically separated for more than 20 million years. It has been stated that mammals lose the ability to cross after 8 million years of divergence, while birds and frogs retain it for 55-60 million years {9992}. If natural selection also contributes to speciation, then the progress of speciation can be substantially faster. For example, several hundred species of cichlids in Lake Victoria probably evolved from a single ancestor over 100 thousand years {9905} but, according to some ideas only over12 thousand years (Johnson et al. 1996).

However, there are types of speciation that can occur almost in an instant. Polyploid speciation is an example of instant speciation; as a consequence of a cell division disorder, a tetraploid individual is formed from a diploid, usually flora, species. Because of their polyploid genome, the members of the new tetraploid species are simultaneously phenotypically different from their diploid predecessors and, because of their different phenotypes, also have different ecological requirements. The old diploid and new tetraploid species thus need not compete and can coexist permanently in a single territory.

Extinction speciation is another example of instant speciation (Fig. XXI.2). A great many 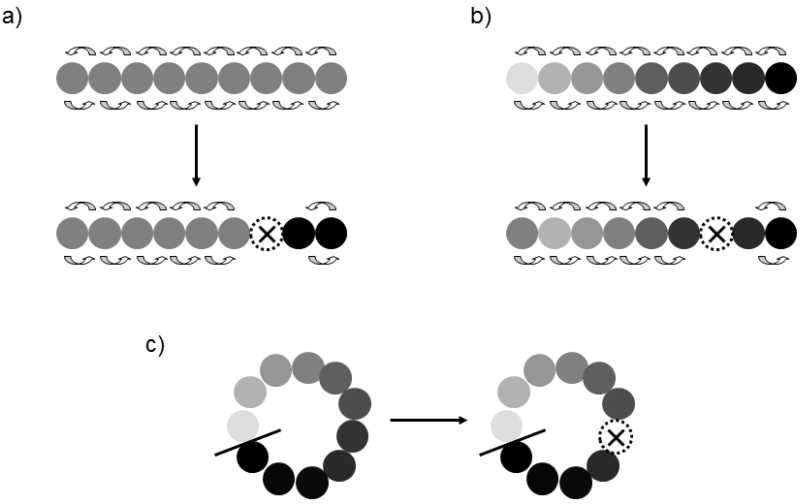 Fig. XXI.2 Extinction speciation. When a species forms a linear chain of individual populations, in which gene flow occurs only between two immediately neighboring populations, for reasons either of spatial distance or reduced genetic compatibility of the members of more distant populations, instant extinction speciation can occur if an internal population becomes extinct. In this case, the gene flow from one end of the range to the other is immediately broken and the two separate parts of the chain can be considered to be separate species from this moment on. Prior to the actual speciation, the individual populations can be genetically and phenotypically similar (a) or can form gradients of genetic and phenotype differences (b). In species with a ring range of occurrence (c), the phenotype and genetic differences between the most distant populations can be so large that their members cannot reproduce together even when the relevant populations neighbor on one another at the site of closing of the ring. However, if these two extreme populations can exchange genes through an uninterrupted chain of the remaining populations, they cannot be considered to constitute independent species

species form an extended linear series of individual populations in their area of occurrence, where exchange of genetic material (sexual reproduction) occurs solely or almost solely between neighboring populations. Geographically more distant populations can thus be so phenotypically and genetically different that their members are not capable of fertile crossing and can occupy different ecological niches in nature. Nonetheless, they must be considered to be the members of a single species, as exchange of genetic material is mediated by a number of mutually neighboring populations, which geographically connect them. Ring species are an interesting example of species with this type of population structure. Their range of occurrence frequently forms a relatively narrow line of mutually neighboring populations that, for example, encircle a certain geographic obstacle (Californian salamanders of the Ensatina genus) or that even extend in a strip around the entire Earth (the lesser black-backed gull (Larus fuscus) and the herring gull (Larus argentatus)). These species spread in the past in one or both directions from the place of their original occurrence until their populations met secondarily in a certain area and closed the range of occurrence to form its present-day ring shape. Thus the phenotypically and genetically most distant populations met at the site of encounter and their members act as well defined species; in the ideal case, they do not cross and even do not compete much. Extinction speciation occurs when one of the inner populations becomes extinct, interrupting the gene flow from one end of the range to the other.

Was this information useful for you?
The classical Darwinian theory of evolution can explain the evolution of adaptive traits only in asexual organisms. The frozen plasticity theory is much more general: It can also explain the origin and evolution of adaptive traits in both asexual and sexual organisms Read more
‹ XXI.1 There are two principally different types of speciation, branching speciation and phyletic speciation up XXI.3 New species can evolve allopatrically or sympatrically, i.e. without contact or in contact with the parent species ›
Draft translation from: Evoluční biologie, 2. vydání (Evolutionary biology, 2nd edition), J. Flegr, Academia Prague 2009. The translation was not done by biologist, therefore any suggestion concerning proper scientific terminology and language usage are highly welcomed. You can send your comments to flegr