XXI.3 New species can evolve allopatrically or sympatrically, i.e. without contact or in contact with the parent species

A new species can be most readily formed by gradual evolution outside of direct contact with the parent species, i.e. by allotropic speciation (Fig. XXI.3). If, for example, a geographically isolated 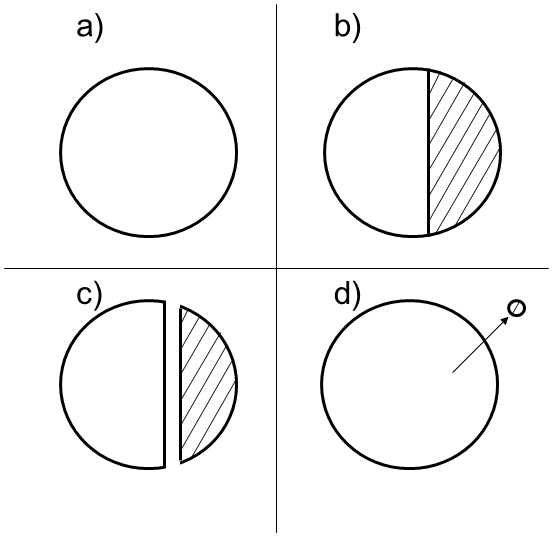 Fig. XXI.3 Classification of geographic speciation. In sympatric speciation (a), the individual species develop within the range of the parent species, where the members of both species are in ecological and genetic contact during speciation, i.e. there are no spatial barriers between them that would prevent their mutual competition and crossing. In parapatric speciation (b), the two species occupy separated ranges at the moment of speciation; these ranges are, however, in contact and gene flow can occur between them through migrants. In allopatric speciation of the vicariant (dichopatric) type (c), the ranges of the two species are separated at the instant of speciation and exchange of migrants does not occur between them. The two ranges were formed by division of the original range by a geographic barrier into two parts of approximately the same size. In peripatric speciation (d), the ranges of the two species are also separated at the instant of speciation and gene flow does not occur between them. However, the range of one species was formed by the separation of only a small part of the population of the parent species, most frequently during colonization of a new territory or survival of a residue of the population in a spatially limited refuge following contraction of the range of occurrence of the original species.

population is formed, which branched off from the population of the original species, and this population is reproductively isolated from the parent population for a sufficiently long time, genetic changes can gradually accumulate in its gene pool that finally lead to phenotype and subsequently also ecological differentiation of the two populations. If the two populations come into contact before they are sufficiently differentiated, the two species can again merge into a single species. Otherwise, the two species can exist sympatrically next to one another (if there was differentiation of their niches) or one of the species can force the other species out of the location or even globally.

Basically, parapatric speciation forms an intermediate link between allopatric speciation and sympatric speciation (Gavrilets 2000; Pennisi 2000a). Parapatric speciation could occur, for example, in not very mobile species whose members form mutually neighboring local populations within their range of occurrence. Crossing occurs between the organisms within these populations, while the gene flow between populations is much less and tends to be mediated by isolated migrants. The fact that the individual populations are constantly in contact means that there is a continuous gene flow between their members, even during speciation. This, of course, complicates their phenotype differentiation and the formation of post-zygotic reproductive isolation barriers. However, if the gene flow is sufficiently limited, for example because the ranges of occurrence of the two populations come into contact only at a certain restricted site, the individual populations can nonetheless adapt to the local conditions of their environments. Crosses born as a consequence of penetration of migrants into the territory of a foreign population exhibit a combination of the traits of the two populations and consequently have suboptimal phenotype and lower fitness in both environments. They are thus gradually eliminated from the population, again reducing the gene flow between the two populations.

The effectiveness of parapatric speciation, similar to the effectiveness of gradual sympatric speciation, is sometimes doubted. Mathematical models indicate that even very small gene flow, for example, exchange of a single individual per generation between the two populations, is mostly enough to prevent genetic differentiation of a new species. However, in actual fact, these conclusions are valid only for differentiation occurring through the action of genetic drift. If more effective processes participate in the differentiation of the two populations, such as evolutionary drives or selection, the intensity of the gene flow would have to be much greater to prevent differentiation.

Was this information useful for you?
The classical Darwinian theory of evolution can explain the evolution of adaptive traits only in asexual organisms. The frozen plasticity theory is much more general: It can also explain the origin and evolution of adaptive traits in both asexual and sexual organisms Read more
‹ XXI.2 In terms of duration, there are instant speciations and gradual speciations up XXI.3.1 Allopatric speciations can be divided into vicariant (dichopatric) and peripatric speciations ›
Draft translation from: Evoluční biologie, 2. vydání (Evolutionary biology, 2nd edition), J. Flegr, Academia Prague 2009. The translation was not done by biologist, therefore any suggestion concerning proper scientific terminology and language usage are highly welcomed. You can send your comments to flegr