XXII.5.2 The existence of periods of mass extinction enables us to divide the history of life on Earth into stages with different characteristic compositions of fauna and flora

Sharp discontinuities exist in the paleontological record, where the species composition of the leading (i.e. most frequent) fossils suddenly changed in certain neighboring layers.Today, it is apparent that these discontinuities were caused by mass extinction, during which the rate of extinction increased many fold.In the periods following mass extinction, the number of species and the sizes of their populations were renewed with a certain delay; however, in a number of cases, the species composition of the renewed communities changed drastically.While the members of a certain taxon dominated in the individual communities in the period that preceded the mass extinction, in the following period the members of this taxon were of only marginal importance and their place could be occupied by the members of some other taxon.On the basis of the existence of a great many more or less marked periods of extinction that affected communities over a wide territory or even life on a global scale, the history of evolution during the Phanerozoic eon, i.e. the period from which numerous fossils of multi-celled organisms with hard skeletons or shells are available, can be divided into time zones: eras (e.g. Palaeozoic), periods (e.g. Permian), epochs (e.g. the Early Devonian) and ages (e.g. Lochkov), see the Fig. XXII.4 .Simultaneously, the individual time zones differ in the compositions of their fauna and flora. 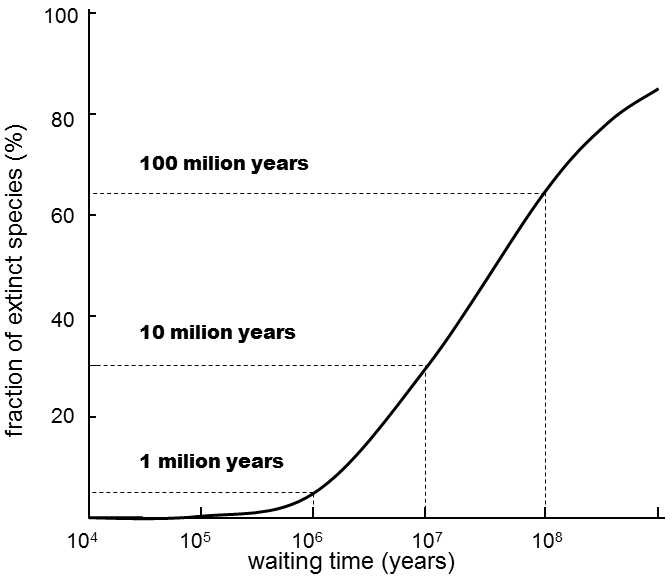 Was this information useful for you?
The classical Darwinian theory of evolution can explain the evolution of adaptive traits only in asexual organisms. The frozen plasticity theory is much more general: It can also explain the origin and evolution of adaptive traits in both asexual and sexual organisms Read more
‹ XXII.5.1 Periods with higher extinction rates can be roughly divided according to their intensity, geographical extent, duration and selectivity up XXII.5.3 The reasons for major fluctuations in the rate of extinction may lie in the internal dynamism of ecosystem evolution or in the changing conditions of the external environment ›
Draft translation from: Evoluční biologie, 2. vydání (Evolutionary biology, 2nd edition), J. Flegr, Academia Prague 2009. The translation was not done by biologist, therefore any suggestion concerning proper scientific terminology and language usage are highly welcomed. You can send your comments to flegr