XXII.5 The frequency of extinctions oscillates drastically in different periods in the history of life; yet in practice we usually distinguish between mass extinctions and background extinctions

Species became extinct throughout all the periods in the history of the Earth.However, relatively few species become extinct in some periods while, at other times, the rate of extinction, i.e. the number of species that became extinct over a certain time interval, temporarily increased drastically (Fig. XXII.2.). 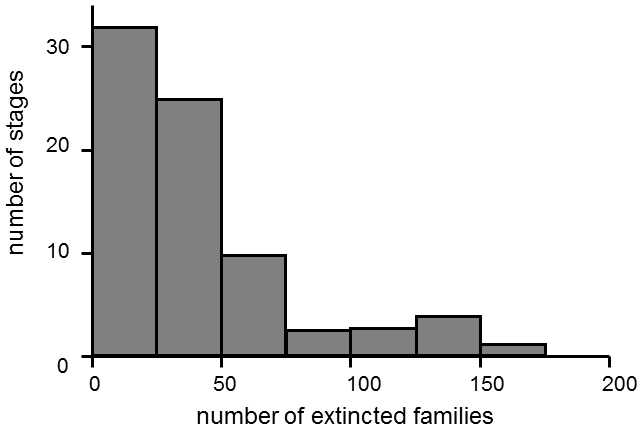 Fig. XXII.2 Variability of the rate of extinction in the Phanerozoic. The histogram depicts the distribution of the speeds of extinction of marine fauna. The rates are expressed as the number of families that died out during a single stage. The right-hand part of the histogram contains the stages during which mass extinction occurred. It is apparent from the histogram that relatively few families have died out over most of the history of the Earth.  However, there were a number of periods during which more than 100 families became extinct. Data taken from Sepkoski 1989 (Sepkoski, 1989), modified according to Newman 1999 (Newman & Palmer, 2003).

On the basis of Sepkoski’s database of 17,621 genera of marine fauna, it has been estimated that the average risk of extinction of a species is 0.25 per million years.However, this value was calculated as an average of the negligible risk of extinction over long periods of time and the very high risk during other periods (Raup 1991).In some periods, the majority of existing species became extinct almost at a single instant, so that even entire higher taxa died out. Extinction is usually classified as mass extinction and “normal” extinction, which is usually termed background extinction.Sometimes, only the “big five” extinctions are classified in the category of mass extinctions, i.e. extinctions at the end of the Ordovician, in the later Devonian, at the end of the Permian, Triassic and Cretaceous (Fig. XXII.3).Simultaneously, some authors do not consider the 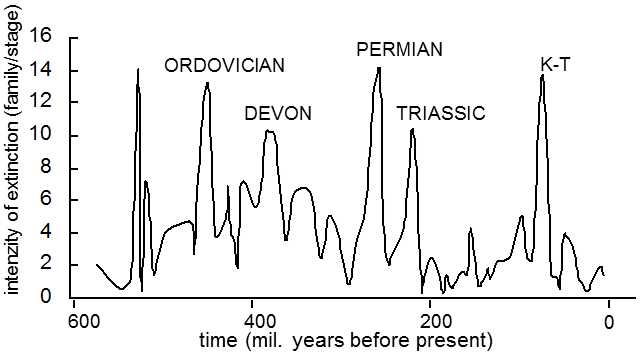 extinctions before the end of the Devonian and at the end of the Triassic to be real mass extinctions as, in contrast to other periods, the mass extinction was not accompanied by a substantial reduction in the overall biodiversity (Kerr 2001).  However, fundamentally, it is highly questionable whether there is actually a difference in principle between mass and background extinction.There were certainly more than five periods with elevated intensity of extinction.In all probability, these periods differed both in the intensity, i.e. number of species affected, and in selectivity.However, there were smooth transitions in both the intensity and selectivity of the extinctions and there were also only rather loose correlations between the selectivities and intensities.For a number of reasons, it is practical to classify extinction as mass and background and thus this will be retained here.However, it is necessarily to constantly bear in mind that the individual periods of extinction always had a specific cause and specific course and that any generalization on the differences between mass and background extinction can hold only under certain conditions.

Was this information useful for you?
You voted 'not at all'.
The classical Darwinian theory of evolution can explain the evolution of adaptive traits only in asexual organisms. The frozen plasticity theory is much more general: It can also explain the origin and evolution of adaptive traits in both asexual and sexual organisms Read more
‹ XXII.4 The scope of extinction at higher taxon levels can be quantified using a number of models, the simplest of which is the foot soldier in the field model up XXII.5.1 Periods with higher extinction rates can be roughly divided according to their intensity, geographical extent, duration and selectivity ›
Draft translation from: Evoluční biologie, 2. vydání (Evolutionary biology, 2nd edition), J. Flegr, Academia Prague 2009. The translation was not done by biologist, therefore any suggestion concerning proper scientific terminology and language usage are highly welcomed. You can send your comments to flegr