XXII.5.5 Mass extinctions have a major impact on the course of macroevolutionary processes

The main impact of mass extinctions lies in the occasional elimination of successful taxa and creation of space for other taxa (Jablonski 2000; Raup 1994).It has been estimated that only 5 % of extinct species died out during mass extinctions, while the remaining 85 % of these species became extinct during background extinction (Raup 1994).In contrast, mass extinctions contributed to at least 35 % of extinctions of families (Newman & Palmer 2003).Without the existence of mass extinctions, a certain type of niche would apparently be occupied in nature for a long time or even permanently by the members of a certain taxon, but not because it would be better, for example because it would be more capable of utilizing the available resources.Their permanent dominance could be caused by the king of the hill effect.On a smaller time scale, the disappearance of a dominant species can release a certain resource for the other existing species.On an ecological scale, this effect is thus manifested in that the individual migrants of a single species can hardly occupy a territory in which a very abundant population of a species utilizing similar resources already lives (even though the latter species may use the resources less effectively).On an evolutionary time scale, the immediate effect of this ecological release can be supplemented by apparently the more important effect of extinction of a dominant taxon on the progress of species selection.The taxon with the greatest number of species, utilizing the widest spectrum of niches, has the greatest chance that it will occupy the newly formed niche through speciation, even if the species formed by speciation of the members of a different taxon were able to better utilize the particular niche.However, during mass extinction events, both successful and unsuccessful taxa are affected and the main criterion for the survival of a species becomes random preadaptation to the drastically altered conditions.  As a consequence of this evening out of chances, a sort of alternation of dynasties can occur on a longer time scale, during which taxa that were completely dominant in various types of environment during a certain period, either in the number of species or in the abundance of their populations, can completely free the space for some other taxon in the period following a mass extinction event {11943}.

Mass extinctions can stop or even reverse evolutionary trends for a certain time (Fig. XXII.9).For example, amongst ammonites, the complexity of the sutures on their shells increased approximately 16-fold over 140 million years.Study of 469 species indicated that a daughter species had more complicated sutures on its shells approximately twice as often as its predecessor.However, during mass extinctions, the species with more complicated sutures disappeared preferentially, so that the anagenesis of this trait always moved back a bit (Saunders, Work, & Nikolaeva 1999). 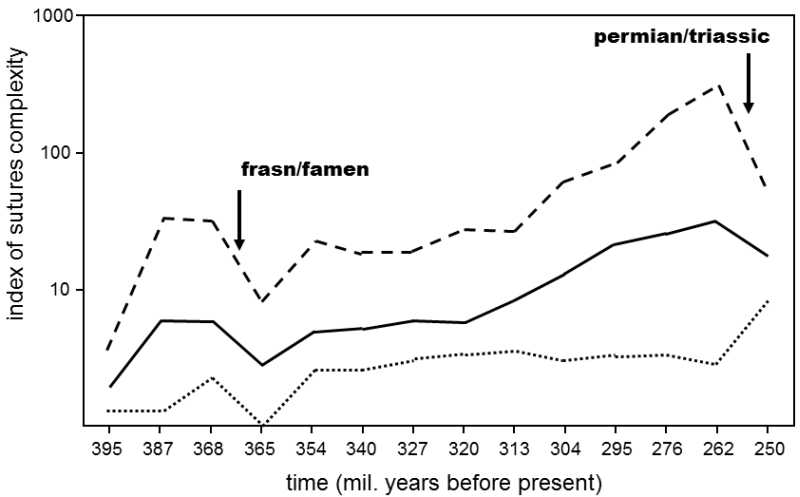 Fig. XXII.9 Interruption of the anagenetic trend during periods of mass extinction. The graph depicts the trend in complexity of the sutures on the shells of ammonites during the Paleozoic. The dashed, full and dotted lines show the values of the maximum, average and minimum complexity, resp., in the individual chronostratigraphic stages. The instants of mass extinction in the Upper Devonian (Frasnian/Framennian) and at the end of the Permian (Permian/Triassic) are depicted on the graph by arrows. The time scale is uneven, as the individual periods, for which the average complexity is determined (expressed in the graph by a dimensionless index) lasted for different periods of time. According to Saunders et al. (1999).

Was this information useful for you?
The classical Darwinian theory of evolution can explain the evolution of adaptive traits only in asexual organisms. The frozen plasticity theory is much more general: It can also explain the origin and evolution of adaptive traits in both asexual and sexual organisms Read more
‹ XXII.5.4.3 After a space of the order of ten million years, the original biodiversity is restored in the communities as a result of a faster rate of speciation up XXI.6 The probability of extinction, and thus also the average length of existence of species, varies amongst groups of organisms, depending on their taxonomic affiliation and ecological requirements ›
Draft translation from: Evoluční biologie, 2. vydání (Evolutionary biology, 2nd edition), J. Flegr, Academia Prague 2009. The translation was not done by biologist, therefore any suggestion concerning proper scientific terminology and language usage are highly welcomed. You can send your comments to flegr