In most organisms, the probability of the death of an individual changes in dependence on their age.In the typical case, the probability of death during a certain time interval is high for very young individuals, low for individuals of middle age and again high and gradually increases for old individuals.Thus, if a group of individuals of a certain age is monitored from a certain moment and the number of individuals from the original group surviving is plotted on a graph at regular intervals, the survival curve will turn sharply down at a certain moment.However, apparently no such dependence of the probability of extinction on the length of existence of the species will be found for the extinction of entire species and the probability of extinction does not depend in any way on the age of the species (Fig. XXII.11).The times of existence of species exhibit an exponential distribution (Fig. XXII.12); thus, if we plot the histogram of the abundance of species in dependence on the length of their existence on a semilogarithmic scale, i.e. the height of the columns in the histogram will correspond to the logarithm of the number of species with different times of existence, a roughly linear dependence will be obtained. 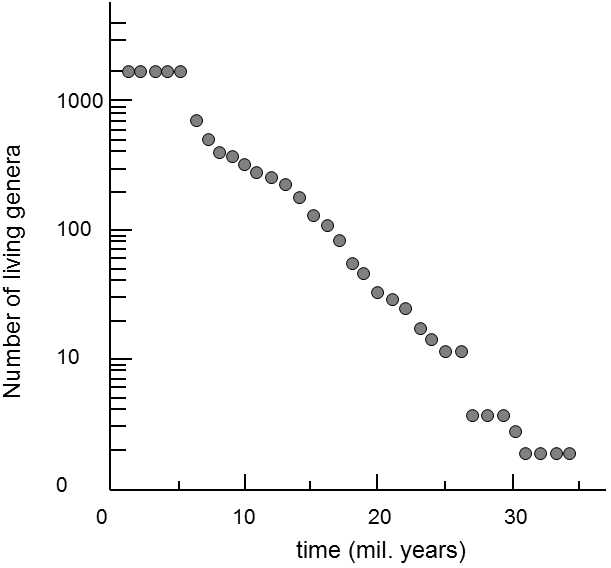 Fig. XXII.11 Survival of the individual genera of mammals. The graph depicts the gradual decrease in the number of genera of mammals over 36 million years. At time t0 the set contained a total of 1585 genera of mammals. There is a linear dependence between the number of surviving genera and the time interval when plotted as a log-normal dependence. This indicates that the probability of extinction of a certain genus is most probably neither increased nor decreased by its period of existence. Similar results are obtained independent of the specific studied phylogenetic line and taxonomic level (species, genera, families). According to Van Valen (1973). 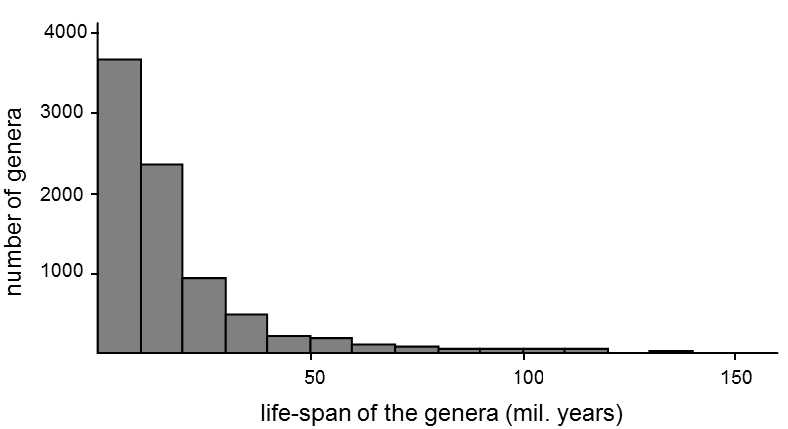 Fig. XXII.12 Survival of the individual genera of marine fauna. The graph was drawn up on the basis of 17,500 extinct genera of marine fauna (vertebrates, invertebrates and microfossils) (Sepkoski, 1989). A similar type of distribution (i.e. exponential distribution) is also obtained if the genera are studied in a specific phylogenetic line. The character of the distribution indicates that a species will become extinct with the same probability at any time after the beginning of its existence. According to Raup (1994).

This result, which was first obtained by van Valen (1973), is certainly surprising.To begin with, it overturns the rather naive concept that species, similar to individuals, age as they get older and that they thus have a predetermined limited maximum length of existence.In this case, a curve fitted through the tops of the columns in the histogram would suddenly turn down in the right-hand part; there would be fewer species with long periods of existence.However, what is more important is that the curve does not turn down at all in the right-hand part.This result means that species do not become more resistant to extinction during their existence.As natural selection acts constantly on species and should lead to gradual accumulation of positive mutations, it would be logical to anticipate that the probability of extinction would gradually decrease for each species.

The absence of relevant correlations between the probability of extinction and the length of existence of a species led van Valen to formulate the red queen hypothesis in the 1970’s.According to this hypothesis, the main factor affecting the survival of a species is the progress of the coevolutionary battle between the particular species and its competitors, its prey and its predators and parasites.As the properties of a certain species improve in evolution, the properties of the other species also improve, so that the result of the evolution of the particular species is only that it keeps pace with the other species forming its niche.Thus, if a species is capable of evolving at the same rate as its competitors, the probability of its survival will not increase but, on the other hand, it will also not decrease.

The red queen model has been employed in the area of microevolution, as one of the explanations of maintenance of sexuality in the population.However, its applicability to the study of macroevolutionary processes has been problematic.It is not easy to explain why the rate of microevolution of a certain species should be exactly the same as the rate of microevolution of all its opponents.Contemporary models assume that, as soon as a certain species begins to lag behind its opponents, there is an increase in the selection pressure acting on it, increasing the rate of its evolution.However, a problem is encountered in the fact that the ability of evolution to respond to selection pressure of the same strength differs substantially in various species of organisms while, for irreversible loss in the evolutionary battle, i.e. extinction, it is sufficient for the species to lose the battle against a single opponent.However, the fact that, in addition to biotic effects on the species, abiotic effects are also active and the species should gradually escape from their reach through its microevolution.

Was this information useful for you?
The classical Darwinian theory of evolution can explain the evolution of adaptive traits only in asexual organisms. The frozen plasticity theory is much more general: It can also explain the origin and evolution of adaptive traits in both asexual and sexual organisms Read more
‹ XXII.6.5 Planktonic species with dense, spatially unstructured populations are more sensitive to background extinction than benthic organisms; the viral theory of background extinctions offers a potential explanation up XXII.7 The average rate of extinction decreases over time and its oscillation amplitude diminishes; ecosystems seem to become more resistant to the spreading of disturbances ›
Draft translation from: Evoluční biologie, 2. vydání (Evolutionary biology, 2nd edition), J. Flegr, Academia Prague 2009. The translation was not done by biologist, therefore any suggestion concerning proper scientific terminology and language usage are highly welcomed. You can send your comments to flegr