XXII.7 The average rate of extinction decreases over time and its oscillation amplitude diminishes; ecosystems seem to become more resistant to the spreading of disturbances

It is apparent from the graph depicting changes in the extinction rate that older peaks in the extinction rate, especially when expressed in percentage of species affected during one chronostratigraphic stage, are generally higher than younger peaks and simultaneously the overall average rate of extinction decreases during the Phanerozoic (Benton 1995)(Fig. XXII.13). 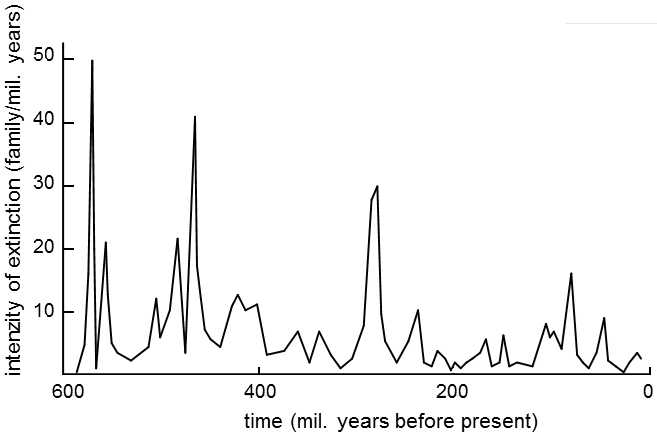 It seems as if species become more resistant to the causes of extinction over time.Comparative paleontological studies further indicate that the average lifetimes of the individual taxa gradually increased over the Phanerozoic.It is not clear to what degree all these phenomena are realistic and to what degree artifacts such as the pull of the present could be responsible for them.Even if they were realistic phenomena, it is not entirely clear whether greater resistance to extinction is a result of changes in the properties of the individual biological species, specifically their greater resistance to extinction, and to what degree this is a consequence of the properties of entire ecosystems.It is quite possible that the probability of extinction of one species as a consequence of the action of external factors of a certain intensity remains constant but that more modern ecosystems could be more resistant to the spreading of disturbances.The extinction of one species at later stages in evolution can thus cause a smaller avalanche of extinction of other species than in the early stages of evolution.

This development of the global ecosystem is reminiscent of the behavior of models of the ecological network studied in the early 1980’s by Post and Pimm (Post & Pimm 1983; Pimm 1991).These networks were formed by gradual addition of organisms differing in randomly generated ecological parameters (ecological interrelations, growth rate, effectiveness of conversion of resources into biomass, etc.).Initially, the systems willingly accepted new species; however, after a certain time they became saturated and the addition of a new species frequently caused the extinction of several other species.It was interesting that the numbers of species that became extinct in response to the addition of a new species had a distribution corresponding to the power law (see XXII.5.3.5).The system existed in this equilibrium state for an arbitrarily long time, undergoing a sort of slow evolution.  Initially, the addition of a new species tended to cause the extinction of a large number of species; however, gradually the average number of affected species decreased.The system became more resistant to disturbances, similar to real ecosystems during evolution.It is understandably not clear whether the development of natural ecosystems depends on the same processes as those determining the development of the above-described models.If this were true, this mechanism could explain not only the development of the extinction rate during the Phanerozoic, but also the observed homeostasis in the numbers of species capable of simultaneous coexistence in ecosystems, manifested, for example, in the rapid renewal of the original biodiversity after the end of a mass extinction event (see XXII.5.4.3).

Was this information useful for you?
The classical Darwinian theory of evolution can explain the evolution of adaptive traits only in asexual organisms. The frozen plasticity theory is much more general: It can also explain the origin and evolution of adaptive traits in both asexual and sexual organisms Read more
‹ XXII.6.6 The probability of extinction of a species does not depend on the length of its existence; a species does not improve or deteriorate in time up XXII.8 Contemporary extinction of organisms shows the characteristics of extremely intensive background extinction ›
Draft translation from: Evoluční biologie, 2. vydání (Evolutionary biology, 2nd edition), J. Flegr, Academia Prague 2009. The translation was not done by biologist, therefore any suggestion concerning proper scientific terminology and language usage are highly welcomed. You can send your comments to flegr