XXIII.8 One consensus tree can be produced from several different trees

Reconstruction of phylogenesis by the maximum parsimony method very frequently yields several trees that do not differ at all or differ very little in the anticipated number of evolutionary changes.If there is no statistically significant difference amongst them, it is not possible to decide which of them best corresponds to the progress of cladogenesis of the relevant group.Similarly, in cases where the cladogenesis of a single group is reconstructed several times in succession on the basis of a different set of traits, mostly trees are obtained that differ in more or less important details.In these cases, it is correct to create one consensus tree on the basis of several trees, which summarizes the information contained in all the obtained trees.

The degree of consensuality can be selected according to the purpose that the study is to serve.If we require one-hundred percent consensuality, we must denote only those binary branches on the final tree that occurred on all the individual trees.If the order of branching off of species differed in some places on the individual trees, the corresponding place on the consensus tree is designated by multifurcation, i.e. a node from which more than two branches originate.The presence of multifurcation on a consensus tree does not mean that we think that the particular species underwent adaptive radiation in the past from one place at a single moment, but only that we are not capable of deciding on the order of branching apart of the particular species on the basis of our data.When creating consensus trees, we need not always require one hundred percent consensuality; for example, for some purposes 90%, 75% or even only a majority consensus is sufficient (Fig. XXIII.10).A supertree is a special type of consensus tree.A supertree summarizes information from trees created for partially overlapping sets of species. 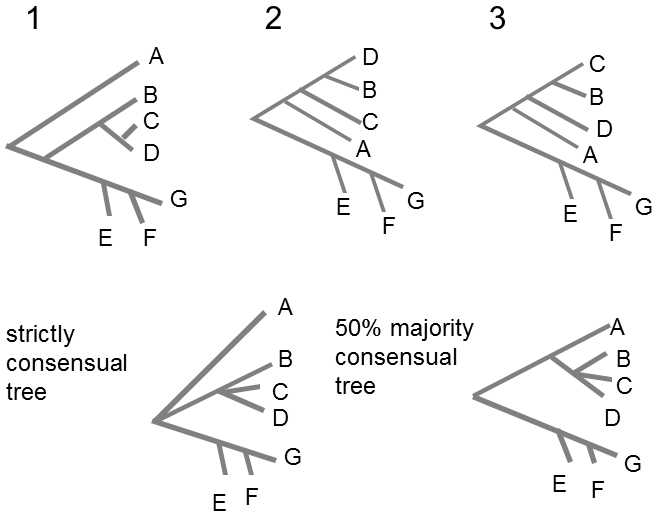 Fig. XXIII.10 Consensus trees. Several trees that differ somewhat can be obtained using independent methods. By combining the information from all the trees, we can create a consensus tree, which shows in which parts the results of the various methods agree and in which they, in contrast, differ. The existence of polytomy indicates that, at the particular place on the tree, we are incapable of deciding on the order of branching off of the species on the basis of our data. On the left is a strictly consensus tree, in which dichotomic branching corresponds to only those nodes that are present in all the individual trees (1, 2 and 3). On the right is a 50% majority consensus tree, in which the dichotomic branching corresponds to only those nodes that are present in a majority of all the individual trees; in this case in at least two of the three trees.

A condensed tree differs in principle from consensus trees.A condensed tree is not created on the basis of a greater number of individual trees.Multifurcations on a condensed tree once again designate sites where we are not certain of the order of branching; however, this time this is not because of conflicting results but rather, for example, because of the absence of the relevant data (for example, lack of suitable synapomorphies).

Was this information useful for you?
You voted 'more or less'.
The classical Darwinian theory of evolution can explain the evolution of adaptive traits only in asexual organisms. The frozen plasticity theory is much more general: It can also explain the origin and evolution of adaptive traits in both asexual and sexual organisms Read more
‹ XXIII.7 A large number of different trees can often be produced using the same diagram of the distribution of synapomorphies up XXV TAXONOMY ›
Draft translation from: Evoluční biologie, 2. vydání (Evolutionary biology, 2nd edition), J. Flegr, Academia Prague 2009. The translation was not done by biologist, therefore any suggestion concerning proper scientific terminology and language usage are highly welcomed. You can send your comments to flegr