XXIII.7 A large number of different trees can often be produced using the same diagram of the distribution of synapomorphies

Trees created on the basis of sharing of previously identified apomorphies and created by the maximum parsimony method depict, not cladogenesis, but the scheme of distribution of synapomorphies within the studied line.In contrast to the tree depicting cladogenesis, the studied species may correspond only to terminal and not internal branches.However, if we study species that branched apart only recently or if the analysis also includes species known from the paleontological record, it can easily occur that ancestor-progeny relationships can also exist between species included in the analysis and that we should thus place them on one of the internal branches of the tree.If we admit this possibility, the number of topologies that agree with the topology of the tree expressing the distribution of synapomorphy within the studied line increases substantially.On the basis of the same scheme of the distribution of synapomorphies, we can then create a greater number of cladogenesis schemes (Fig. XXIII.8).

Fig. XXIII.8 Cladograms and schemes of cladogenesis. On the basis of a single cladogram created using cladistic methods, it is frequently possible to form a large number of various cladogenesis schemes. The original cladogram (a) is frequently unrooted and it is assumed that all the studied species correspond to terminal branches of the tree. The individual cladogenesis schemes (cladograms in the sense of evolutionary systematics) include a hypothesis on the position of the root and thus the time polarity of the evolutionary changes and also accept the possibility that ancestor-descendant relationships can exist amongst the studied species, i.e. that some of them can be placed on the inner branches of the tree. The left-hand column in the figure (b) contains some possible cladogenesis schemes that are compatible with the original cladogram, while the right-hand column contains schemes that are not compatible with this cladogram.

As mentioned previously, there is considerable ambiguity in designation of the individual trees.The proponents of cladistics mostly designate the scheme of distribution of synapomorphies by the term cladogram and the scheme depicting cladogenesis is called a phylogram.In contrast, evolutionary taxonomists (i.e. the proponents of what is called eclectic taxonomy, or evolutionary taxonomy) use the term cladogram to denote the tree depicting cladogenesis and use the term phylogram (phylogenetic tree) for trees where the order of branching depicts the progress of cladogenesis and the length of the branches corresponds to the progress of anagenesis, i.e. the number of anagenetic changes in the individual lines (Fig. XXIII.9). 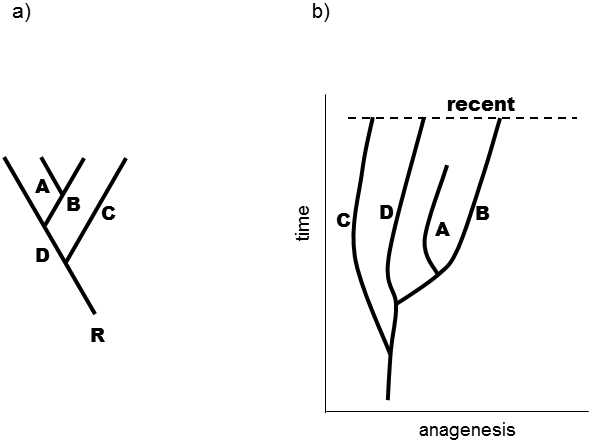 However, it must be pointed out that the vast majority of biologists are not aware of the differences in the meaning of the individual types of trees and erroneously consider the scheme of the distribution of synapomorphies to be the phylogenetic tree.

Was this information useful for you?
The classical Darwinian theory of evolution can explain the evolution of adaptive traits only in asexual organisms. The frozen plasticity theory is much more general: It can also explain the origin and evolution of adaptive traits in both asexual and sexual organisms Read more
‹ XXIII.6.2 If the location of the root can be determined, plesiomorphic and apomorphic forms of traits can be distinguished directly from their distribution on the obtained tree up XXIII.8 One consensus tree can be produced from several different trees ›
Draft translation from: Evoluční biologie, 2. vydání (Evolutionary biology, 2nd edition), J. Flegr, Academia Prague 2009. The translation was not done by biologist, therefore any suggestion concerning proper scientific terminology and language usage are highly welcomed. You can send your comments to flegr