XXV.3.1 The looser evolutionary systematic understanding of monophyly differs from the stricter cladistic view in that it permits the creation of paraphyletic taxa

According to the cladist approach to monophyly, only a taxon, all of whose members have an exclusive common ancestor, i.e. an ancestor that is not simultaneously an ancestor of a species classified in a different taxon at the same taxonomic level, is considered to be monophyletic. Consequently, the thus-defined taxon contains the common ancestor of a certain line and all its descendants. In this strict interpretation, monophyly is sometimes called holophyly (Fig. XXV.1). 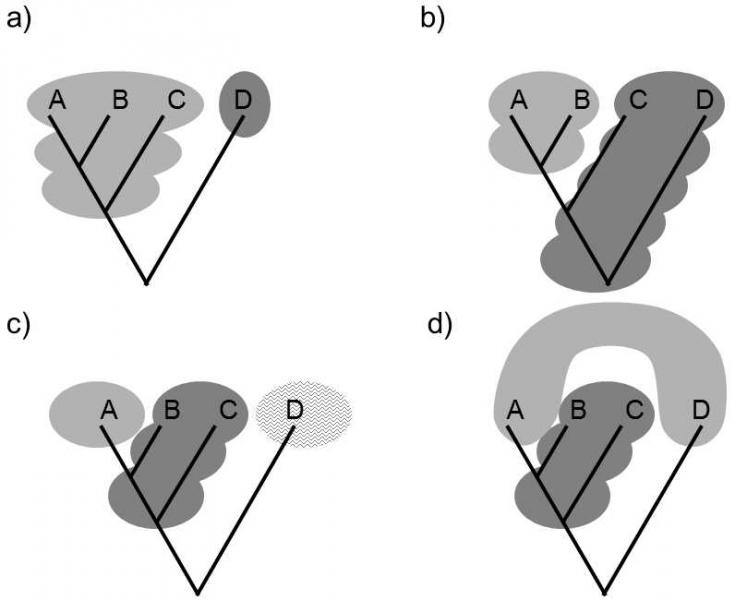 In contrast, evolutionary systematists consider the taxon to be monophyletic when it contains its ancestor and all or only some of its descendants. Any species that was transferred from A to form separate taxon B need not simultaneously be an ancestor of any species that remained in taxon A. Taxa that comply with the evolutionarily systematic criterion of monophyly but not the stricter cladistic criterion, i.e. taxa of which some branches have been recognized to have the status of separate taxa at the same level, are called paraphyletic taxa. The class of reptiles is an example of a paraphyletic taxon. Within this class, the class of birds branched off, so that the common ancestor of all reptiles is also the common ancestor of all birds. However, none of the species of birds is simultaneously an ancestor of a species classified in the taxon of reptiles, so that reptiles still comply with the looser evolutionarily systematic requirement of monophyly.

At the present time, the proponents of the cladistic approach tend to have the advantage; however, it is not clear which concept of monophyly and thus which concept of taxonomy will prevail in the end. Cladists primarily argue that paraphyletic taxa are our artificial constructs formed of species that, from the viewpoint of cladogenesis, do not exhibit any property that only they would have in common. On the basis of a system containing artificial, i.e. also paraphyletic taxa, for example, we cannot predict the distribution of properties that we did not yet know at the time of formation of the system. They further point out that, as soon as we admit the existence of paraphyletic taxa, the taxonomic system ceases to be hierarchical; to be more exact, situations will occur where a taxon at a certain level will be immersed in a taxon at the same level. For example, in the above-mentioned case, the class of birds will basically be immersed inside the class of reptiles. On the other hand, evolutionary systematists object that, from the viewpoint of cladogenesis, paraphyletic taxa (in contrast to polyphyletic taxa) have the common property that, with the exception of the species from which their common ancestor evolved, no other member of a different taxon is simultaneously a direct ancestor of any of its species. From the viewpoint of anagenesis, they have a common property not only in the absence of apomorphy, on the basis of which part of their line was classified in a separate taxon, but most probably also in the absence of other apomorphys evolving in the members of a split-off taxon. Simultaneously, these other apomorphies were not known at the time of separation of part of the evolutionary line into a separate taxon. According to evolutionary systematists, the objection about the unnaturalness and lack of usefulness of paraphyletic taxa is no longer valid – membership in a paraphyletic taxon permits us to predict the occurrence (or rather absence) of certain forms of traits. They respond to the second objection by stating that a system encompassing immersed taxa at the same level may be contrary to our aesthetic sense and sense of order but, in actual fact, only such a system properly reflects the real course of evolution. The individual lines now representing higher taxa actually branched off in the past within a taxon at a lower level. Most side branches of the evolutionary line, called stem group of the particular taxon, i.e. lines that branched off in the early stages of the particular evolutionary line, and their members carry only some apomorphys characteristics for modern representatives of this line, but a paleontological record of stem group species does not exist and has not been preserved. In contrast to lines of the crown group, i.e. lines that mutually branched off at later stages in the evolution of the particular taxon and who frequently still living members mostly exhibit characteristic apomorphies, they are thus not included in our analyses. Only this fact enables us to define a reasonable number of holophyletic taxa, of which a significant percentage would at least generally overlap with the traditional groups of organisms defined formerly on the basis of their mutual relatedness and phenotype similarities (Fig. XXV.2). 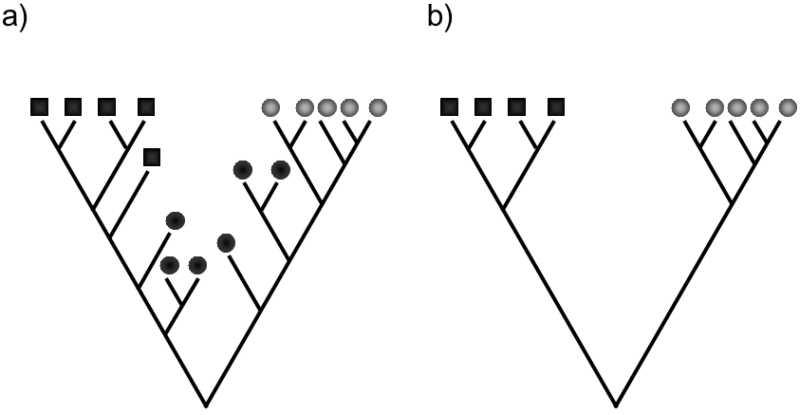 Fig. XXV 2 Stem groups and lines of the crown group. Simplified phylograms depict cladogenesis and the distribution of two binary traits: shape (square or circle) and colour (dark or light). a) Phylograms also including extinct species in the stem group, b) phylograms including only living species, here only representatives of the lines of the crown group. As soon as the system would also include members of the stem groups, a large number of the holophyletic taxa would contain species with various combinations of plesiomorphic forms of traits, so that they would most likely have no equivalents in the traditional system

Was this information useful for you?
The classical Darwinian theory of evolution can explain the evolution of adaptive traits only in asexual organisms. The frozen plasticity theory is much more general: It can also explain the origin and evolution of adaptive traits in both asexual and sexual organisms Read more
‹ XXV.3 The basic requirement on biological taxa is their monophyly up XXV.4 Knowledge of cladogenesis provides information on which taxa must not be created, but not on which taxa should or must be created ›
Draft translation from: Evoluční biologie, 2. vydání (Evolutionary biology, 2nd edition), J. Flegr, Academia Prague 2009. The translation was not done by biologist, therefore any suggestion concerning proper scientific terminology and language usage are highly welcomed. You can send your comments to flegr