XXV.4.1 Evolutionary systematists use the achieved level of anagenesis as the main guideline in creating taxa 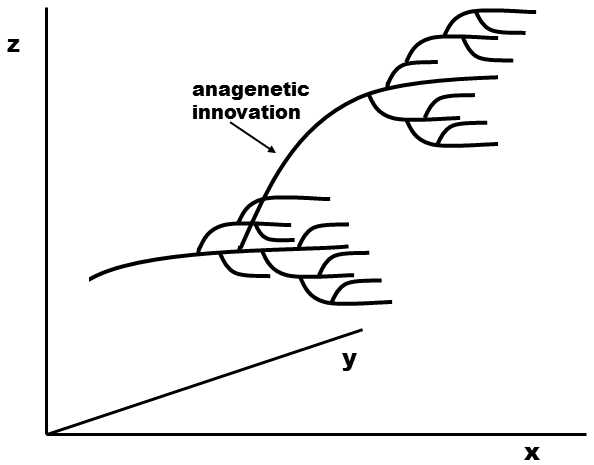 Fig. XXV.4 An important anagenetic change, an evolutionary innovation, whose occurrence evolutionary systematists (but not cladists) can take into account in the creation of an independent taxon at the same level as the taxon in which the innovation evolved. Changes in time (the x axis) within a single anagenetic level (for example differences between species of a single genus) are depicted on the y axis, while changes in the attained level of anagenesis (evolutionary innovations capable of affecting the further progress of macroevolution, see XXIVI.2.1) are depicted on the z axis.

A decision on whether a particular phenotype change is a sufficiently large innovation for its carriers to deserve to be a separate taxon remains a subjective matter. This means that delimitation of the individual taxa in a natural system is, to a considerable degree, a matter of the subjective decision of taxonomists and subsequently of convention. If he is to strictly respect the requirement on monophyly of the created taxa, a systematist must frequently also include in the particular taxon species or groups of species that do not exhibit the given, from our viewpoint key, property. Some species could have retained the original plesiomorphic form of the particular trait or could even return to this form (Fig. XXV.5). 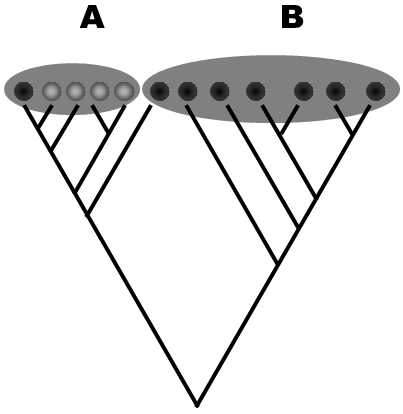 Fig. XXV.5 Revertants to the original form of the trait. A simplified phylogram depicts cladogenesis and the distribution of the phenotype trait color (dark or light). Because of the strict requirement on preservation of monophyly, an evolutionary systematist must leave revertants in the original dark form of the trait in taxon A, even though this taxon was primarily defined on the basis of the new (light) form of the trait.

A further complication is entailed in the very real possibility that the evolutionary innovation that is to form the basis for defining the taxon could appear independently several times in a phylogenetic line and that this does not correspond to homology but rather homoplasy. It is prohibited to define a taxon on the basis of shared homoplasy; however, it is not clear whether this can always be completely avoided. In some cases, a particular trait is formed on the basis of some other trait functioning as preadaptation for its formation. Consequently, the relevant new features occur within the particular line independently in a number of species whose common ancestor did not exhibit the particular new trait (Fig. XXV.6). 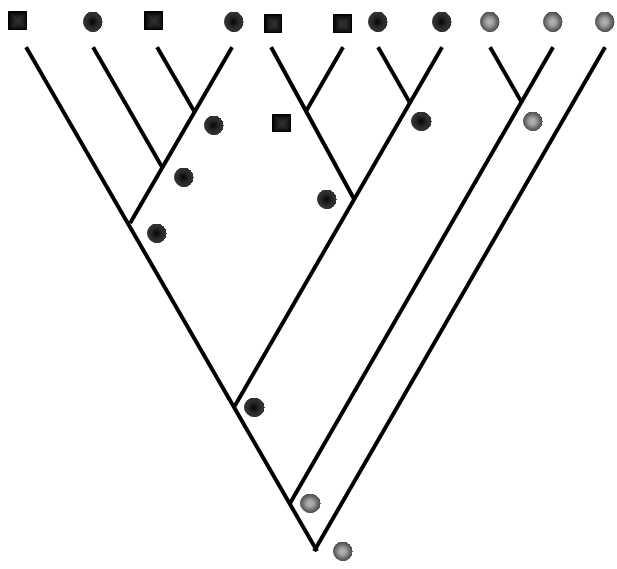 Was this information useful for you?
The classical Darwinian theory of evolution can explain the evolution of adaptive traits only in asexual organisms. The frozen plasticity theory is much more general: It can also explain the origin and evolution of adaptive traits in both asexual and sexual organisms Read more
‹ XXV.4 Knowledge of cladogenesis provides information on which taxa must not be created, but not on which taxa should or must be created up XXV.4.2 When defining a particular taxon on the basis of shared traits, evolutionary systematists must take into account the definitions of other taxa within the relevant evolutionary line ›
Draft translation from: Evoluční biologie, 2. vydání (Evolutionary biology, 2nd edition), J. Flegr, Academia Prague 2009. The translation was not done by biologist, therefore any suggestion concerning proper scientific terminology and language usage are highly welcomed. You can send your comments to flegr