XXVIII.2 Lamarck is arguably the most important representative of evolutionary biology before Darwin

Evolutionary biology as an autonomous field of science appeared only with the publication of Darwin’s book “On the Origin of the Species” (Darwin 1860).  However, philosophers and learned people in various fields, and probably also the lay public, have apparently posed questions relating to the origin of living creatures since the beginning of the history of the human race.Practically all mythologies have stories explaining the formation of original living nature, including humans.A great many religious systems offer their own explanations.Prior to the mutual differentiation of science and philosophy, ontology, as part of philosophy, carried out a systematic search for answers, amongst other things, to questions related to the origin of life and of human beings.The individual philosophical systems have specific authors so that, in outlining the history of evolutionary biology, we can name specific learned people who were the first to expound certain evolutionary thoughts.In this connection, it is almost obligatory to mention Anaximandra amongst antic authors; in the 6th century B.C., he stated that living creatures were formed from water, while terrestrial animals, including humans, evolved from fish.In the 5th century B.C., Empedocles proclaimed that organisms were formed from individual components, individual organs that originally existed independently and randomly joined together into a sort of coalition, where dysfunctional organisms formed by connection of an unsuitable combination of organs, disappeared and only the functional and viable survived.Therefore, he discovered the mechanism of sorting from the standpoint ofstability, and not the mechanism of selection, as is sometimes stated, see chapter I.3.1). Darwin’s predecessors also included Aristotle (384–322 B.C.), who was, amongst other things, the first systematic zoologist and simultaneously the first well-known representative of the essentialist view of species and systematic biology as such.The idea that the individual species differ in certain essential properties while, within a species, the individuals differ only in unimportant properties, became the basis in the 18th century for the most influential zoological and botanical systems, including systems that were published after 1735 by Carl von Linné (1707–1778) (Fig. XXVIII.1). 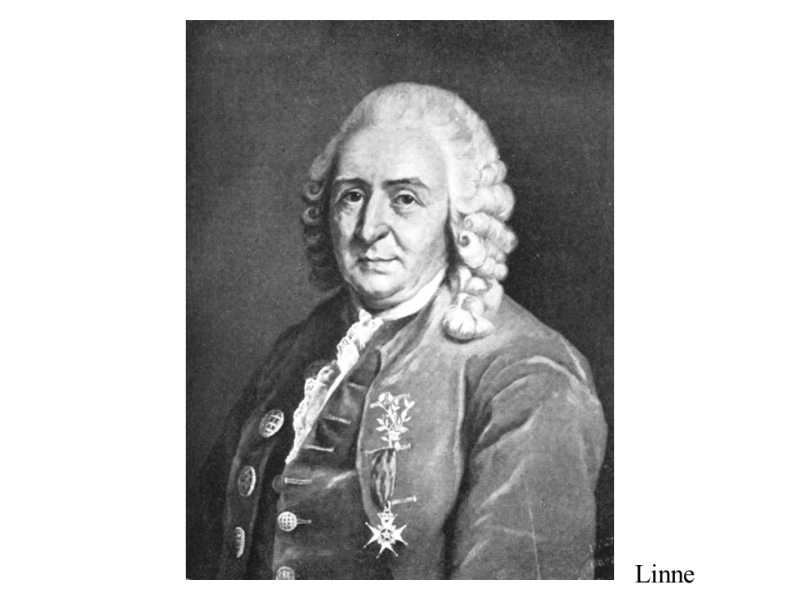 In the 18th century, concepts that the individual species were formed by God (Linné) and concepts that organisms evolved and possibly were still evolving from nonliving matter (Maupertuis,La Mettrie,Diderot) existed side by side.Ideas about the spontaneous formation of organisms from nonliving matter were, in time, supported by developments in technology, as the discovery of the microscope enables monitoring of the “formation” of living microorganisms from nonliving matter (for example from a hay extract) with one’s own eyes.Count Buffon, properly Georges Louis Leclerc, comte de Buffon (1707–1788) (Fig. XXVIII.2), 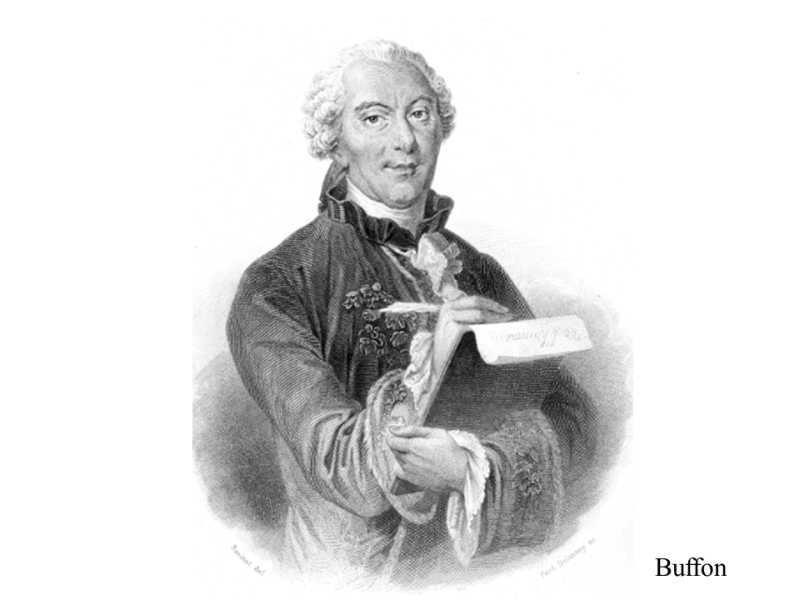 also contributed indirectly to the later development of evolutionary biology; in his monumental work “Histoire naturelle générale et particulière des animaux”, he put forth, amongst other things, the idea that closely related species of organisms, say within a single genus, share the same essence, and seriously discussed the possibility that they could be formed one from another.Buffon finally tended to favor the idea that evolution of species does not occur in nature.The fact that his work discusses arguments for and against evolution, however, prepared the ground for his later successors, including Darwin himself.George Cuvier(1769–1832) (Fig. XXVIII.3) 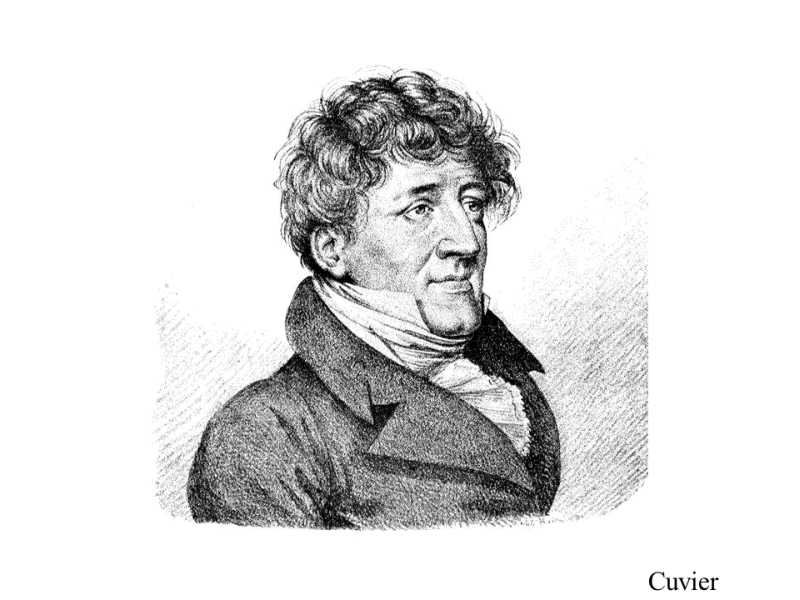 was an important French biologist who greatly affected the development of evolutionary biology.As a paleontologist, he demonstrated that species of organism existed on the Earth in the past that no longer exist at the present time.It thus followed that the simple concepts of the invariability of nature or its low (Biblical) age are quite certainly erroneous.However, he simultaneously pointed out that now-extinct organisms were just as perfect as extant organisms and the simple ideas about the gradual improvement of species are apparently excessive simplifications. 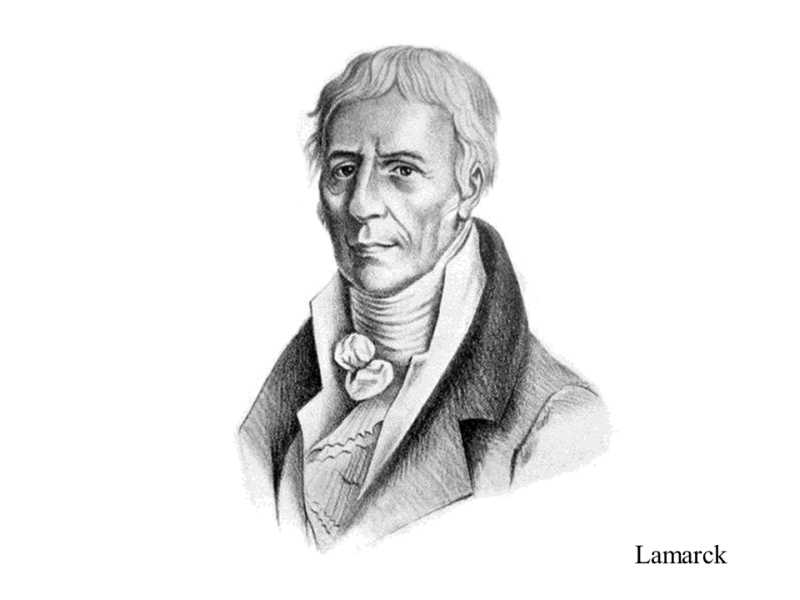 was apparently the most important evolutionary biologist of the era before Darwin.He published his most important ideas concerning evolution in the book “La philosophie zoologique” in 1809.Lamarck assumed that organisms were formed and emerge repeatedly, always originally in a simple form and then gradually improve and become more complicated during evolution.  According to Lamarck, the fact that we encounter organisms of various complexities in nature is a result of the fact that the individual developmental  lines of organisms arose at variously distant times in the past and thus achieved different stages of evolutionary progress.Lamarck also proposed a possible mechanism for evolution.He assumed that evolution occurs as a gradual improvement in the adaptation of the structure of organisms to natural conditions, to be more exact to the activities that they perform in their environment.Lamarck assumed that any organ that is strained by a particular activity increases in size during the life of the individual and its functionality increases.Simultaneously, like most of his contemporaries, he believed that acquired traits are inherited, i.e. that a trait that an individual acquired during its individual life is also passed down to its descendants.He assumed that the first step in the evolution of new structures is a change in the behavior of a particular organism, thanks to which, for example, the given species begins to utilize a new type of food.This leads to straining and exercising of certain organs, which thus increase in size and the particular trait, i.e. enlarged organ, is automatically passed down to the progeny.It is sometimes erroneously stated that Lamarck assumed that organisms can change through the direct action of the external environment.Stated simply, if a terrestrial vertebrate finds itself in water, its limbs are altered to fins through the action of the water.However, roughly these ideas of the effect of the environment on the evolution of body structure are actually attributed to another important biologist of the 19th century, Étienne Geoffroy Saint Hilaire (1772–1844) (Fig. XXVIII.5). 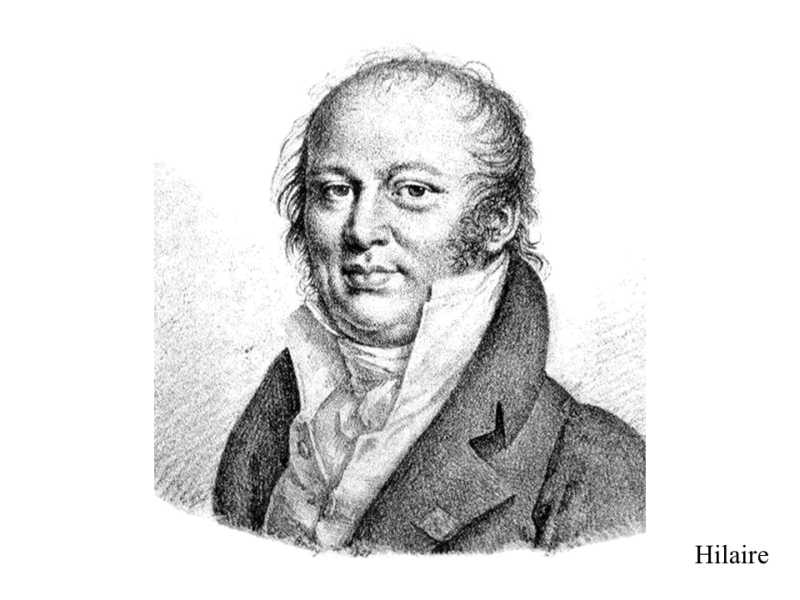 However, even Saint Hilaire  assumed that the environment primarily affects the embryogenesis of animals, rather than the actual body structure of the adult organism.In contrast, Lamarck never though that the environment had a direct effect on the body structure of either the adult or the developing individual.He always stated that the effect of the environment is only indirect – through the fact that it offers the organism new opportunities and affects its behavior, and it is only the new behavior of the organism that affects the body structure of the organism.Lamarck never received any great recognition, either during his life or, in fact, even after his death.For example, Darwin explicitly stated that Lamarck’s theory had nothing in common with his own evolutionary theories and that Lamarck’s work made no contribution to their formulation.This statement is apparently not completely true.At the very least, Lamarck postulated the actual fact of evolution and stated that this evolution has a gradualistic character and suggested one of the possible mechanisms through which evolution of adaptive traits could occur, i.e. effective adaptation of organisms to their environment.Even if Lamarck’s work did not directly affect Darwin, it most certainly affected some of his teachers and predecessors.A propos, Lamarck’s concept of the role of behavior in evolution is not fundamentally incorrect (see the Baldwin effect, XVI.3.2).

His important opponent, the already mentioned founder of paleontology and comparative zoology, George Cuvier, also contributed substantially to the development of evolutionary theory.Amongst other things, he demonstrated that that fauna changed continuously (but not gradually) over time, where a great many species disappeared very suddenly from the paleontological record.He assumed that these species probably died out because of a local catastrophe.He further demonstrated that, in the younger layers, fauna encompasses species that are similar to modern species, while older layers contain quite different species.His main objection to the evolutionary theories of Lamarck and Saint Hilaire was based on the fact that the paleontological record tends to contain a large number of discontinuities and certainly does not provide any evidence for a gradual change of one species into another.We now know that this was a quite correct observation that we are now capable of explaining in the context of modern evolutionary biology, both through the existence of mass extinction and also through the model of frozen plasticity (Flegr 2008) or some other mechanism [14417, 14404, 14405, 4661]explaining the existence of punctuated equilibria.

Was this information useful for you?
The classical Darwinian theory of evolution can explain the evolution of adaptive traits only in asexual organisms. The frozen plasticity theory is much more general: It can also explain the origin and evolution of adaptive traits in both asexual and sexual organisms Read more
‹ XXVIII.1 The history of evolutionary biology can be divided in four stages: the period before Darwin, the period of classical Darwinism, the Neo-Darwinist period and the current Post-Neo-Darwinist period up XXVIII.3 Darwin presented several important and complementary evolutionary theories in his book “On the Origin of Species by Means of Natural Selection”. ›
Draft translation from: Evoluční biologie, 2. vydání (Evolutionary biology, 2nd edition), J. Flegr, Academia Prague 2009. The translation was not done by biologist, therefore any suggestion concerning proper scientific terminology and language usage are highly welcomed. You can send your comments to flegr