When the substitution rate was studied for a greater number of genes for various taxa, it was found that the molecular clock ticks substantially faster for some taxa than for others.The relative substitution rate test can be used to compare the rate of molecular clocks (Nei and Kumar, 2000). This test determines the statistical significance of the difference in substitution rates for two sister taxa, i.e. for two taxa about which we know that they split off from a common ancestor a certain time ago (Fig. IX.9). 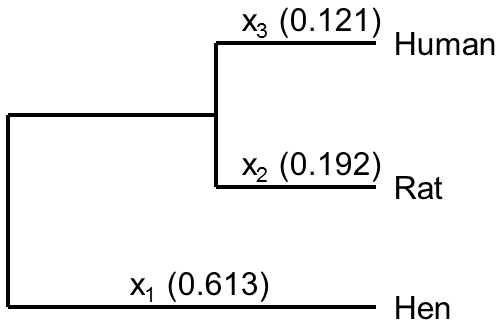 For example, the results of molecular studies have shown that the molecular clock for the mitochondrial genes in sharks ticks 7-8× slower than in primates and ungulates (Martin, Naylor, & Palumbi 1992). There were also apparently substantial changes in the rate of the molecular clock in rodents; however, it is not entirely clear whether there was a substantial increase in the substitution rate only for nonsynonymous mutations or whether this also applied to synonymous mutations (Nei and Kumar, 2000).

The rate of the molecular clock is affected by a great many factors.Individual species and entire taxa can differ in their mutation rates.The main source of differences in the mutations rates lies in the presence or absence of some reparation mechanisms and also in the degree of exposure to the action of some mutagens.Demographic factorsare also important.The intensity of selection is much smaller in a growing population than in a population with a constant size or even in a population that is shrinking.The intensity of selection is, understandably, negatively correlated with the overall substitution rate, which in most genes primarily reflects the probability and thus also the frequency of fixation of selectively negative mutations.The substitution rate is also greater in populations whose size fluctuates frequently and substantially in time.The effective size of the population is substantially reduced in this case and reflects the nominal population size at the time of the population minimum to a far greater degree than that in times of the population maximum (see V.3.2.1).Thus the effectiveness of the action of negative selection is thus substantially reduced in fluctuating populations and genetic drift leads to more frequent fixation of negative and slightly negative mutations.

The intensity of genetic recombination is one of the factors affecting the substitution rate that should be mentioned.In sections of the genome with reduced frequency of recombination, on the one hand, a large portion of neutral or almost neutral mutations are eliminated from the population by background selection, i.e. together with the elimination of negative mutations; on the other hand, part of the neutral or almost neutral mutations is fixed together with fixation of positive mutations, i.e. through the action of selective sweep, i.e. the second component of genetic draft (see IX.5.2).Studies performed on closely related species of drosophila or on geographically distant populations of drosophila of the same species indicated that the substitution rate is apparently elevated in the region of the genome with low frequency of recombination and that the effect of selective sweep predominates over the effect of background selection (Aquadro, Begun, & Kindahl 1994).

Was this information useful for you?
You voted 'not at all'.
The classical Darwinian theory of evolution can explain the evolution of adaptive traits only in asexual organisms. The frozen plasticity theory is much more general: It can also explain the origin and evolution of adaptive traits in both asexual and sexual organisms Read more
‹ IX.4.3.1 Step changes in substitution rate can be related to a change in the gene function or to a change in the number of its copies in the genome up IX.4.4.1 The length of the generation period affects the substitution rate for neutral mutations, while selectively significant mutations become fixed at a rate that is highly independent of the generation period of the studied species ›
Draft translation from: Evoluční biologie, 2. vydání (Evolutionary biology, 2nd edition), J. Flegr, Academia Prague 2009. The translation was not done by biologist, therefore any suggestion concerning proper scientific terminology and language usage are highly welcomed. You can send your comments to flegr