Differences in the generation timeof the compared species of organisms are an important source of unevenness in the ticking of the molecular clock.The length of the generation time has a negative effect on the mutation rate, i.e. the number of mutations in a certain position formed per time unit in all the individuals in the population.Most mutations occur during cell division under normal conditions.As a consequence, a similar number of cell divisions occur in organisms with a longer generation time during their lifetime in the germinal cell line as in organisms with a generation time that is several orders of magnitude shorter.In addition, disproportionately more mutations apparently occur during meiosis than during mitosis.For example, it has been observed in mice that about 50% of all mutations occurred in the perigametic interval, i.e. between the last mitosis and the end of the meiosis (Hall 2000).In actual fact, it has been found that the number of fixed neutral mutations in sections of noncoding proteins, e.g. in pseudogenes, or in position 3 of most codons is roughly constant for various organisms only if it is related to the number of generation times of the studied species and not to a constant time interval (Ohta 1995).However, the effect of the generation time is much weaker for nonsynonymous and thus potentially selectively significant mutations and the numbers of fixed mutations here tends to be proportional to the absolute time rather than to the number of generation times that elapsed from the moment of splitting off of the given species (Kimura 1993).

The “nearly neutral theory of molecular evolution” provides a potential explanation of the causes of the existence of this difference in the rate of the molecular clock for nonsynonymous and synonymous mutations (Ohta 1993; Ohta 1996) (see V.5).This explanation is based on the more or less reasonable assumption that a large portion of nonsynonymous mutations is slightly detrimental for their bearers.The rate of fixation of slightly negative mutations (k) or, to be more exact, the percentage of negative mutations that fall in the category of slightly negative mutations acting as effectively neutral mutations, is inversely proportional to the effective size of the population.Organisms with a long generation time, i.e. in general large organisms, mostly have a substantially smaller effective population size than organisms with a short generation time.Consequently, a greater fraction of nonsynonymous mutations fall in the category of selectively neutral for them and thus they have an overall larger fixation rate.As a consequence, the effect of the generation time on the number of mutations formed per year (negative) and the effect of the generation time on the rate of their fixation (positive) are mutually cancelled out for mutations in the coding region. 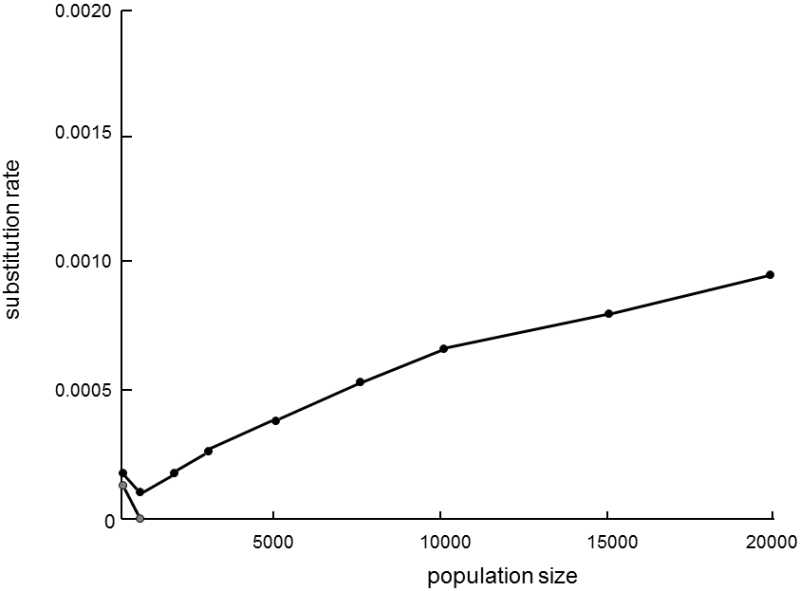 (together with fixation of highly advantageous mutations) then it can be expected that the generation time will even have a positive effect on the substitution rate of the species.Greater changes in the external conditions occur during one generation time in long-lived organisms than in short-lived organisms, so that these species are exposed to greater selection pressure on the formation and fixation of new favorable mutations.More mutations are formed over the same period in species with a short generation time, because their germinal cells undergo more divisions over the same period of time; however, simultaneously, a smaller percentage of mutations are fixed, because the species live in a “more slowly” changing environment where it is not really necessary to change a tried-and-true phenotype, and consequently highly advantageous mutations are fixed less frequently in their populations through positive selection and other types of mutations are fixed less frequently by genetic draft.

The author of the hypothesis and simultaneously the author of the term genetic draft, J.H. Gillespie, pointed out the fact that his model is capable, not only of suggesting an alternative explanation for the absence of an effect of the generation time on the substitution rate of nonsynonymous mutations, but is also the only known explanation for the absence of an impact of the population size on polymorphism within a population.It follows from the theory based on genetic drift that the amount of molecular polymorphism should be positively correlated with the size of the population.However, nothing of this sort has been observed at the molecular level; most species from micro-organisms to elephants exhibit approximately the same level of polymorphism (Fig. IX.11).Assuming the validity of the standard models of genetic drift, this would mean that all species 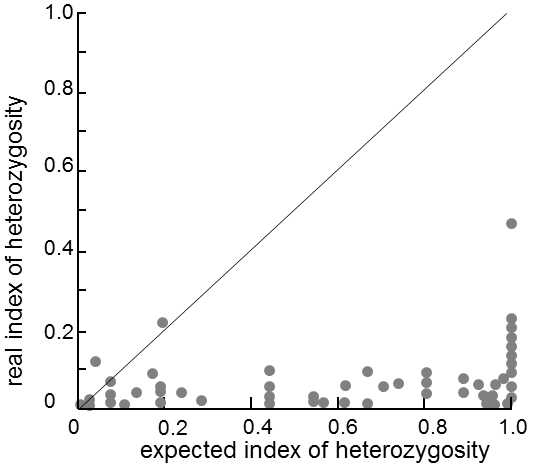 Fig. IX.11. Absence of the expected correlation between the degree of polymorphism and the effective size of the population. On the basis of the model of neutral evolution and estimates of the size of the population, generation times and mutation rates, the expected individual indices of heterozygosity were calculated for 77 species of organisms and these estimates were compared with the actually measured values of these indices.  The results showed that, contrary to theoretical expectations, almost all the points lie far from the diagonal, which means that the degree of polymorphism is basically not at all correlated with the effective population size and generation time. Data according to Nei and Graur (1984), modified according to Page and Holmes (2001).

have approximately the same effective population size.In contrast, models based on genetic draft indicate that, from a certain, not-very-large, population size, the amount of polymorphism present in the population is basically not dependent on its size (Gillespie 2001).

Was this information useful for you?
The classical Darwinian theory of evolution can explain the evolution of adaptive traits only in asexual organisms. The frozen plasticity theory is much more general: It can also explain the origin and evolution of adaptive traits in both asexual and sexual organisms Read more
‹ IX.4.4 The molecular clock also ticks at different rates for different types of organisms and different taxa up IX.4.4.2 The substitution rate correlates with both the size of animals and their metabolic rate ›
Draft translation from: Evoluční biologie, 2. vydání (Evolutionary biology, 2nd edition), J. Flegr, Academia Prague 2009. The translation was not done by biologist, therefore any suggestion concerning proper scientific terminology and language usage are highly welcomed. You can send your comments to flegr