IX.4.4.2 The substitution rate correlates with both the size of animals and their metabolic rate

The substitution rate is numerically equal to the mutation rate (see IX.2).This means that species with higher mutation rates should also have a proportionally increased substitution rate.The species-characteristic mutation rate depends on a number of factors, including the intensity of metabolism, i.e. the rate of metabolism related to one gram of body weight.For example, a great many metabolic reactions entail the formation of free radicals, which can damage the DNA and thus induce mutations.In general, it can be assumed that species with smaller body dimensions will have greater metabolic intensity than large species and also that homoiothermal (warm-blooded) species will have higher mutation rates than poikilothermal (cold-blooded) species.It has actually been observed that the substitution rate calculated on the basis of sequence divergence is higher for homoiothermal species than for poikilothermal species.Simultaneously, the expected negative correlation has been observed between the substitution rate and the average body size of the members of the individual species (Fig. IX.12)(Martin & Palumbi 1993). However, it is not entirely certain whether the cause of the correlation between the body size and 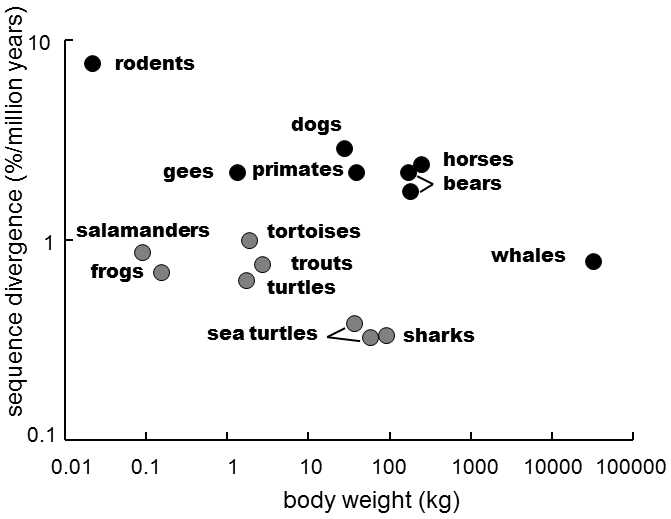 Was this information useful for you?
The classical Darwinian theory of evolution can explain the evolution of adaptive traits only in asexual organisms. The frozen plasticity theory is much more general: It can also explain the origin and evolution of adaptive traits in both asexual and sexual organisms Read more
‹ IX.4.4.1 The length of the generation period affects the substitution rate for neutral mutations, while selectively significant mutations become fixed at a rate that is highly independent of the generation period of the studied species up IX.4.5 The excessively wide confidence intervals in the dating of cladogenetic events are the major drawback of the molecular clock ›
Draft translation from: Evoluční biologie, 2. vydání (Evolutionary biology, 2nd edition), J. Flegr, Academia Prague 2009. The translation was not done by biologist, therefore any suggestion concerning proper scientific terminology and language usage are highly welcomed. You can send your comments to flegr