The individual periods of mass extinction also differ in their degree of specificity, i.e. range of species that are primarily affected.Taxonomic specificityis generally rather low.The members of various developmental lines that live in a similar environment and have similar ecological requirements tend to be affected to the same degree (Raup 1994)(Fig. XXII.7). 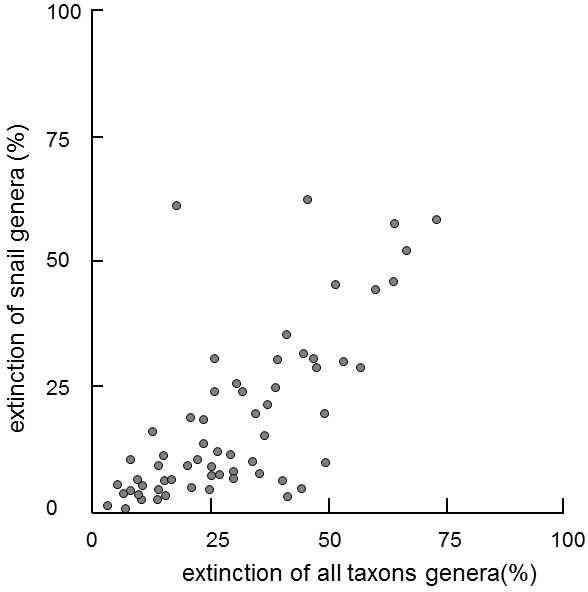 Nonetheless, it seems that, at least in some cases, a certain taxonomic specificity is manifested. For example, mass extinction at the boundary between the Mesozoic and Tertiary affected mainly dinosaurs on the continents, while mammals crossed this boundary with substantially smaller losses.A study performed on 117 North American genera of mammals, reptiles, amphibians and fish demonstrated that 43% of genera became extinct at the end of the Cretaceous.Simultaneously, however, all 22 genera of dinosaurs became extinct, while only 8 of 24 genera of mammals died out.Similarly, only 4 of 12 genera of amphibians became extinct (Raup 1994).

Ecological specificityis usually somewhat greater.Certain communities of organisms were especially affected during some periods of mass extinction, for example communities of marine or, on the other hand, terrestrial ecosystems (Benton 1995).In some cases, on the basis of affecting of the individual types of organisms, it was possible to estimate what was the immediate cause of extinction of organisms in a particular period.

Was this information useful for you?
The classical Darwinian theory of evolution can explain the evolution of adaptive traits only in asexual organisms. The frozen plasticity theory is much more general: It can also explain the origin and evolution of adaptive traits in both asexual and sexual organisms Read more
‹ XXII.5.3.5 Ecosystems, similar to many other complex systems, can experience spontaneous periodic or aperiodic occurrence and spreading of sudden changes up XXII.5.4.1 Opportunistic species pre-adapted to a degraded environment prevail immediately after the end of mass extinction events ›
Draft translation from: Evoluční biologie, 2. vydání (Evolutionary biology, 2nd edition), J. Flegr, Academia Prague 2009. The translation was not done by biologist, therefore any suggestion concerning proper scientific terminology and language usage are highly welcomed. You can send your comments to flegr