XXIII.6 Once cladogenesis has been reconstructed, particularly the distribution of synapomorphies, i.e. evolutionarily derived forms of homological traits, must be examined

In the reconstruction of cladogenesis, all the homologous traits are not similarly useful.Systematic biologists have intuitively known these facts and have respected them for ages.However, it wasn’t until 1950 that Willi Hennig in his book “Grundzüge einer Theorie der phylogenetischen Systematik” explicitly stated the requirements that cladogenesis be reconstructed exclusively on the basis of a single category of homologous traits – termed synapomorphies.A trait is understood to refer to any structure, function or behavior that occurs in various species in at least two different forms.From an evolutionary standpoint, the individual forms of a certain traits are not equivalent; one of them, the plesiomorphic form, for short plesiomorphy, is evolutionarily older in the particular phylogenetic line and the other forms were formed secondarily all at once or in a certain order as a consequence of anagenetic changes in the original form of the trait.These evolutionarily derived forms are termed apomorphic forms, abbreviated apomorphies.If several species (or higher taxa) within the studied phylogenetic line inherited certain apomorphies from their common ancestor, this apomorphy is termed a synapomorphy; in contrast an autapomorphy is an apomorphy that no other species shares with the given species.The distribution of synapomorphies within the given set of studied species is the best guide for reconstruction of cladogenesis.Even if two species share a large number of plesiomorphies, they need not be closely related in the particular line (Fig. XXIII.6). 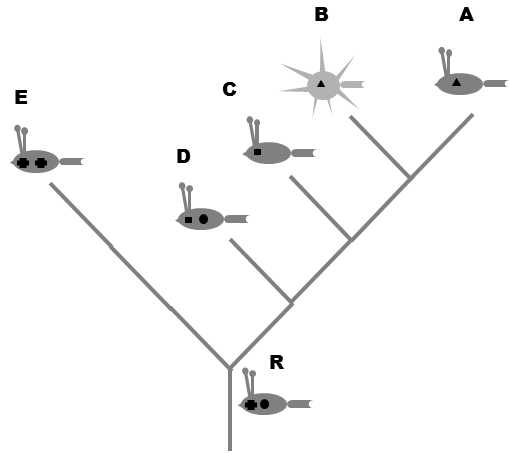 Fig. XXIII.6 Importance of apomorphic and plesiomorphic forms of traits for phylogenetics. Species A shares a large number of plesiomorphic traits with species C, D and E and only one apomorphic trait with highly divergent species B. Nonetheless, it must be considered a sister species of species B, as the particular trait is a synapomorphy that is shared by only species A and B.

Was this information useful for you?
You voted 'not at all'.
The classical Darwinian theory of evolution can explain the evolution of adaptive traits only in asexual organisms. The frozen plasticity theory is much more general: It can also explain the origin and evolution of adaptive traits in both asexual and sexual organisms Read more
‹ XXIII.5.2.3 The significance of a difference between two trees is tested on the basis of the difference in the minimum number of evolutionary changes; the quality of the trees and reliability of the traits is described by the retention or homoplasy index up XXIII.6.1 Under favorable conditions, synapomorphies can be identified on the basis of paleontological data, by comparing the situation in sister taxa or by study of ontogenesis ›
Draft translation from: Evoluční biologie, 2. vydání (Evolutionary biology, 2nd edition), J. Flegr, Academia Prague 2009. The translation was not done by biologist, therefore any suggestion concerning proper scientific terminology and language usage are highly welcomed. You can send your comments to flegr