XXIII.6.2 If the location of the root can be determined, plesiomorphic and apomorphic forms of traits can be distinguished directly from their distribution on the obtained tree

If we reconstruct the cladogenesis of the individual species on the basis of sharing of already-identified apomorphies, we obtain an already rooted tree, i.e. a tree that shows where the common ancestor of all the studied species was located.As a consequence, we also know the polarity and time order of the individual anagenetic changes.However, in order to determine this information on the basis of a tree created using the maximum parsimony principle, we must first find the root of the tree, i.e. the branch that connects the area of the tree containing species of the studied phylogenetic line with the rest of the tree containing members of the other phylogenetic lines. This branch depicts the common ancestor of the studied species (Fig. XXIII.7).The original tree is not rooted and the common evolutionary ancestor of all the studied species can be located at any of its sites. 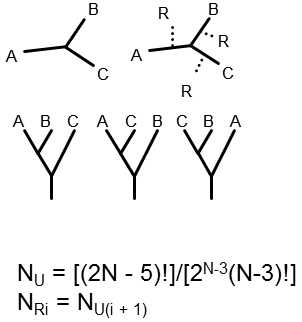 The root of the tree can be found, for example, using a phenetic method.The most frequently used method, UPGMA (Unweighted Pair Group Method with Arithmetic Mean), provides rooted phenograms directly and comparison of the phenogram and the tree obtained by the maximum parsimony method frequently allows us to identify the probable location of the root.However, the method of rooting the tree using a phenogram provides reliable results only when the particular phenogram was created on the basis of mutually independent, selectively neutral traits, which were fixed in the context of all the species of the particular line at roughly the same rate.Primarily, some types of molecular biology data can fall in this category of traits.If this type of data is not available and the topology of the phenogram and the maximally parsimonious tree fail to agree, a different method must be chosen.s

In practice, a tree is most frequently rooted by also including, in the analysis, a species of which we know beforehand with certainty that it branched off from the common ancestor sooner than the other species included in the analysis branched apart.This species is called an outgroup.The root of the tree is then placed in the middle of the branch connecting the outgroup with the rest of the tree.A member of a sister phylogenetic line, i.e. a line that branched off from the closest ancestor of the common ancestor of all the observed species, generally works best as the optimum outgroup.If we are not certain which line is a sister line to the line whose cladogenesis is being studied, if the relevant data are not available or if a large amount of new features (autapomorphies) accumulated within the given sister line, the tree can be rooted using a member of some other more distant phylogenetic line or, even better, the members of several more distant lines (together in the same analysis or one after another in separate analyses).

Was this information useful for you?
The classical Darwinian theory of evolution can explain the evolution of adaptive traits only in asexual organisms. The frozen plasticity theory is much more general: It can also explain the origin and evolution of adaptive traits in both asexual and sexual organisms Read more
‹ XXIII.6.1 Under favorable conditions, synapomorphies can be identified on the basis of paleontological data, by comparing the situation in sister taxa or by study of ontogenesis up XXIII.7 A large number of different trees can often be produced using the same diagram of the distribution of synapomorphies ›
Draft translation from: Evoluční biologie, 2. vydání (Evolutionary biology, 2nd edition), J. Flegr, Academia Prague 2009. The translation was not done by biologist, therefore any suggestion concerning proper scientific terminology and language usage are highly welcomed. You can send your comments to flegr